There are various file types with their associated functions. Collection of files is a file directory. The directory contains information about the files, including attributes, location and ownership. Much of this information, especially that is concerned with storage, is managed by the operating system. The directory is itself a file, accessible by various file management routines.Information contained in a device directory are:

Operation performed on directory are:

Advantages of maintaining directories are:

In this a single directory is maintained for all the users.

TWO-LEVEL DIRECTORYIn this separate directories for each user is maintained.

Directory is maintained in the form of a tree. Searching is efficient and also there is grouping capability. We have absolute or relative path name for a file. 1. Continuous Allocation: A single continuous set of blocks is allocated to a file at the time of file creation. Thus, this is a pre-allocation strategy, using variable size portions. The file allocation table needs just a single entry for each file, showing the starting block and the length of the file. This method is best from the point of view of the individual sequential file. Multiple blocks can be read in at a time to improve I/O performance for sequential processing. It is also easy to retrieve a single block. For example, if a file starts at block b, and the ith block of the file is wanted, its location on secondary storage is simply b+i-1. 2. Linked Allocation(Non-contiguous allocation) : Allocation is on an individual block basis. Each block contains a pointer to the next block in the chain. Again the file table needs just a single entry for each file, showing the starting block and the length of the file. Although pre-allocation is possible, it is more common simply to allocate blocks as needed. Any free block can be added to the chain. The blocks need not be continuous. Increase in file size is always possible if free disk block is available. There is no external fragmentation because only one block at a time is needed but there can be internal fragmentation but it exists only in the last disk block of file.Disadvantage:

3. Indexed Allocation:It addresses many of the problems of contiguous and chained allocation. In this case, the file allocation table contains a separate one-level index for each file: The index has one entry for each block allocated to the file. Allocation may be on the basis of fixed-size blocks or variable-sized blocks. Allocation by blocks eliminates external fragmentation, whereas allocation by variable-size blocks improves locality. This allocation technique supports both sequential and direct access to the file and thus is the most popular form of file allocation. 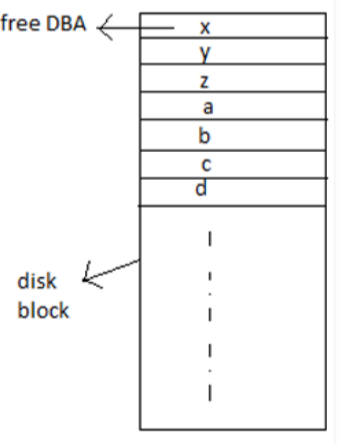 Disk scheduling is important because:

There are many Disk Scheduling Algorithms but before discussing them let’s have a quick look at some of the important terms:

These situations are avoided in CSAN algorithm in which the disk arm instead of reversing its direction goes to the other end of the disk and starts servicing the requests from there. So, the disk arm moves in a circular fashion and this algorithm is also similar to SCAN algorithm and hence it is known as C-SCAN (Circular SCAN).

Each algorithm is unique in its own way.Overall Performance depends on number and type of requests.