The document Absorption and Assimilation of Food NEET Notes | EduRev is a part of the NEET Course Biology Class 11.
All you need of NEET at this link: NEET

The process through which the food stuff diffuses through the intestinal mucous membrane and reaches the blood, is termed as absorption. The process of absorption in different parts of the alimentary canal takes place in the following manner.

Absorption in duodenum – Iron & calcium ion are absorbed in the duodenum.

The lining cells of the villi are columnar epithelial cells called enterocytes. On the surface of enterocytes, numerous microvilli are found, they increase the surface area of mucous membrane. 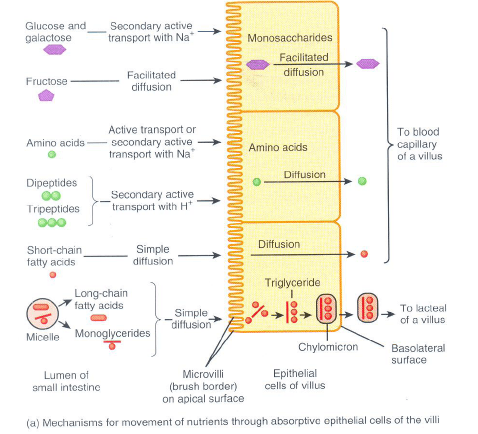 Digestion and absorption of Carbohydrate

Absorption of glucose molecules occurs along with Na+ by active symport (Co-transportation) and Fructose is absorbed Facilitated diffusion, because constration of glucose is higher in cells where as concentration of fructose is low in cells.

Digestion and absorption of amino acid –

Digestion and absorption of Fat – Undigested food goes into rectum where it gets converted into faeces contains – water and solid matter. Solid matter contains dead bacteria 30%, fat 10-12%, proteins 2-4% and others. These faeces ejected outside through anus.

In the evening the excreta of rabbit is in the form of solid, dry pellets. These have less amount of undigested cellulose in them. This nature of rabbit to eat is own excreta is termed as Coprophagy or Caecotrophy or also Pseudorumination. Double circulation of food through the alimentary-canal is termed as Caecotrophy.

Food of rabbit mainly consists of cellulose so this activity is necessary for rabbits.

Pellets of rabbit don't have a foul smell because it has a minimum amount of protein in its diet. Carnivores have excess protein-rich diet so their excreta is highly foul-smelling.

SUMMARY OF ABSORPTION OF DIFFERENT NUTRIENTS

Large intestine secretes mucus which adhere to undigested food makes it lubricated, so it further passes smoothly from rectum to anus.

Cure –Proteins are necessary for growth, repair of tissue and for body defence therefore adequate amount of proteins must be present in the diet.

SOME IMPORTANT MINERAL,THEIR EFFECT OF DEFICIENCY AND FUNCTION

(ii)A2 – Dehydro retinol which is essential for epithelial lining, glands and tear production.

(2) Xeropthalmia – due to deficiency of A2 Tear formation is absent.

It is the main problem of blindness in children throughout the world.

Synthesized in skin from cholesterol by UV light.

It is necessary for bone & teeth Deficiency disease – Rickets in children and osteomalacia in adult.

Menadiane is the important source of the synthetic vitamin K.

Vitamin B6 (Pyridoxine) Function as co-enzyme. It is also known as rat antidermatitis factor.

Folic Acid – It is also known as folacin or Vitamin M.

It is needed for formation of RBC & synthesis of DNA Deficiency disease – Anaemia.

It is necessary for healing of the wound Deficiency disease– Scurvy (deficient formation of collagen fibres).

2. Vitamin B17 – It is recently discovered anticancer vitamin.

4. Vita B15 – It is also known as pogonic acid, deficiency causes disorder in liver.

5. Vitamin B6 also used in the treatment of tuberculosis.

7. One pair of vomerine teeth is found in the palate of frog.

8. Fangs are the poison teeth of snakes, these are the maxillary teeth.

9. Upper incisor teeth are modified in tusk in elephant.

10. Upper canine teeth are modified in tusk in walrus.

12. Enamel is absent in Sloth and Armadillo.

13. Salivary glands are absent in whale.

14. The tongue is non-motile in whale.

15. Gall bladder is absent in lemprey, whale, rat and horse.

18. Nature's most potent antioxidant - vitamin E, which is maximum in liver.

19. Vitamin B12 is absent in plants, However it is considered that Spirulina (an alga) contains B12.