t = the time in which the change occurs (s)

Δv = short form for "the change in" velocity (m/s)

Classification of Motion in Straight Line

This type of motion is defined as the motion of an object in which the object travels in a straight line and its velocity remains constant along that line as it covers equal distances in equal intervals of time, irrespective of the duration of the time. 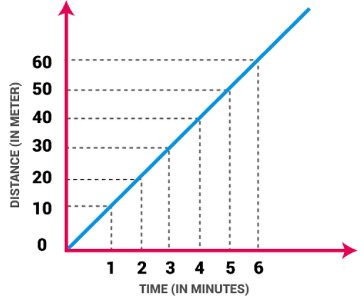 If a body is involved in rectilinear motion and the motion is consistent, then the acceleration of the body must be zero.

(i) If the speed of a car is 10 m/s, it means that the car covers 10 meters in one second. The speed is constant in every second.(ii) Movement of blades of a ceiling fan.

This type of motion is defined as the motion of an object in which the object travels with varied speed and it does not cover same distance in equal time intervals, irrespective of the time interval duration. 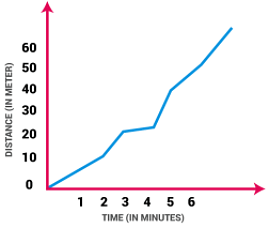 If a body is involved in rectilinear motion, and if the motion is not consistent, then the acceleration of the body must be non-zero.

(ii) The motion of a train.

Now, people usually get confused between uniform motion and uniform acceleration. In the later phenomena, the object is having a constant acceleration in rectilinear motion, which means the object has different speed in every second, which clearly defines that motion is changing.

Let’s understand this through an example. Suppose, a particle started its motion from rest with an acceleration of 1m/s² for 2s and then continued it for next 1s changing to 2m/s². The distance travelled during this will be:

It is the change in velocity divided by an elapsed time. For instance, if the velocity of a marble increases from 0 to 60 cm/s in 3 seconds, its average acceleration would be 20 cm/s². This means that the marble’s velocity will increase by 20 cm/s every second.

Acceleration is a = dv/dt

Freefall object experiences an acceleration of g= 9.8m/s² in a downward direction that is towards the center of the earth. In upward direction it is -g = -9.8m/s²

Acceleration of the Velocity-Time graph 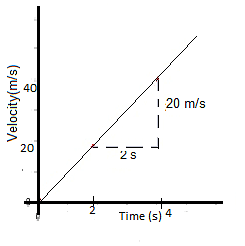 Solved Example:Q. A stone of mass m is thrown straight upward from the top of a multi-story building with an initial velocity of +15 m/s. Find out the acceleration of stone just after it is thrown?