The document Activated Complex Theory Of Bimolecular Reaction Or Transition State Theory Or Eyring Equation Chemistry Notes | EduRev is a part of the Chemistry Course Physical Chemistry.
All you need of Chemistry at this link: Chemistry from the quantum mechanics,
energy = hv

The vibrat ional frequency v is the rate at which the activated complex mo ve across the energ y barrier i.e. the rate constant k2 is ident ified by v.
Then the reaction is

Relation between ΔE# and Ea

On differentiate above equation

Value of A, using above equations From Eyring theory and Arrhenius theory we have

Problem.  Consider the decomposition of

where Δng = difference in number of moles between act ivated complex and reactant.

(i) First, equilibrium between the reactants and the intermediate is maintained during the course of the reaction. (ii)  The intermediate undergoes decay to form product.
Then the rate law expression is

∵ I is in equilibrium wit h the reactant then

In this,  A* is the act ivated reactant and undergoes one of two reactions.

Then, rate of product formation is

& rate of formation of A*

It state that the observed order dependence on [A] depends on the relative magnitude of k–1[A] versus k2. At high reactant concentration, k–1[A] > k2 and

i.e. at low pressure, the rate of formation product is second order in [A].
Then

kuni is the apparent rate constant for the reaction defined as 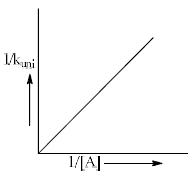