JEE : Addition and Multiplication of a Vector by a Scalar JEE Notes | EduRev

The document Addition and Multiplication of a Vector by a Scalar JEE Notes | EduRev is a part of the JEE Course Mathematics (Maths) Class 12.
All you need of JEE at this link: JEE Let a and b be any two vectors. From the initial point of a, vector b is drawn and parallelogram OACB is completed with OA and OB as adjacent sides. The vector OC is defined as the sum of a and b. This is called the parallelogram law of addition of vectors.

The sum of two vectors is also called their resultant and the process of addition as composition. 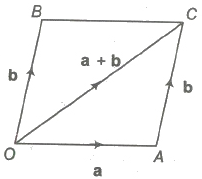 Multiplication of a Vector by a Scalar

Let a be a given vector and λ be a scalar. Then, the product of the vector a by the scalar λ is λ a and is called the multiplication of vector by the scalar.