An adjective is a word that is used to add something to the meaning of a Noun or a Pronoun and describe about it.

Ashok is an intelligent boy. 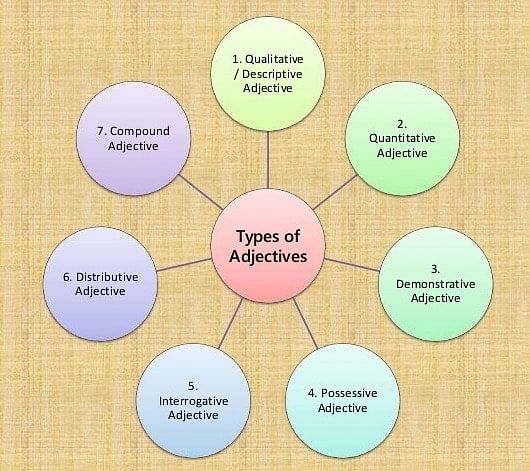 1) Adjectives of Quality: - The adjective which tells us the kind of a person or a thing.Example: - brave, cloudy, honest, big, beautiful, ugly, dirty, etc.

2) Adjectives of Quantity: - Which tells us how much the thing is.Example: - much, little, some, any, sufficient, enough, whole, etc.

3) Adjectives of Number: - Which shows how many persons or things are there.Example: - many, few, all, several, some, first, seven, most, etc.

4) Distributive Adjectives: - It shows the person or the thing which are taken one at a time.Example: - each, every, either, neither, etc.

5) Demonstrative Adjectives: - It points out the persons or things.Example: - This, that, these, those, such.

6) Interrogative Adjectives: - Adjectives which are used to ask question.Example: - What, which, whose, etc.

It is the better of the two books. Superlative degree is used in comparing more than two things or persons. He is the best of the three boys.

Rule 2 – When two changes happen together, comparative degree is used in both.The higher you go, the cooler you feel.

Rule 3 – Double comparatives and double superlatives must not be used. He is more wiser than his brother

He is wiser than his brother

Rule 4 - The adjectives ending in – ior (prior, junior, senior, superior, inferior, posterior); take to after them.He is senior to me. This book is superior to that book.

Rule 5- Some adjectives like unique, ideal, perfect, extreme, complete, universal, infinite, perpetual, chief, entire, round, impossible are not compared.It is the most unique book

It is a unique book

Rule 6 - When comparative degree is used in superlative sense, it is followed by any other.Kapil is better than any bowler

Kapil is better than any other bowler.

Rule 7 – When we compare two qualities in the same person or thing, the comparative ending ‘– er’ is not used. You are wiser than old

You are more wise than old

Rule 8– Compound adjective formed by adding worth is placed after the noun it qualifies.This is a worth seeing sight

This is a sight worth seeing

Rule 9 – When there are two objects of comparison, then to avoid repetition of noun ‘that’ is used for singular noun and ‘those’ for plural noun.The climate of Ranchi is better than that of Gaya.

Determiners are adjective words like a, an, the (articles), some, any, each, every, either, neither, a great many, little, a little, the little, few, a few, the few, less, fewer, much, many.

To express quantity some is used in the affirmative sentences; any in negative sentences.I have some milk but I do not have any sugar. She bought some shoes but did not buy any dresses.

a) Some is used in interrogative sentences when making polite requests.Will you give me some sugar? Will you have some more tea?

b) In conditional sentences as:If there are any oranges in the market, please buy some.

c) Use of any in interrogative or negative sentences:Did you buy any stamps? Have you any articles on the recent events? I didn’t see any oranges in the market.

Either has two meanings:

Much stands for quantity and many denotes number.Was there much milk left in the pot? Were there many people watching the movie? We haven’t got many books. She doesn’t have much money.