The document Agriculture (Part - 1) - Geography Notes | EduRev is a part of the UPSC Course Geography for UPSC CSE.
All you need of UPSC at this link: UPSC

Agriculture is the primary source of livelihood for about 58% of India’s population. The Indian food industry is poised for huge growth, increasing its contribution to the world food trade every year.

Various factors responsible for the low productivity of Indian agriculture are: 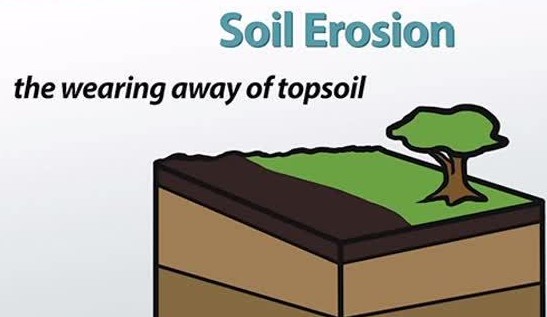 In India, the agrarian system needs reorganization according to the present-day needs and conditions on improved lines. Increased agricultural productivity is essential for the following three reasons:

The basic conditions for improving productivity in agriculture, according to FAO are:

Diversification of farm production i.e., besides cultivation of crops, dairy, poultry, and fishing industries should be developed.The above factors will not only help in maintaining but also in developing soil productivity to the highest practicable level thereby stabilizing our agrarian economy and improving the plight of rural India.The physical resources of soil, water, and climate are sufficient to yield at least double, perhaps more than double the current production with full use of machines, chemicals, sufficient water supply, and a combination of other good management practices.

Soil and Water ConservationLaunched from the very First Plan, soil and water conservation programs are one of the essential inputs for increasing agricultural output in the country.

Objectives of Soil and Water Conservation

The periodicity of the season usually allows two and in few cases three harvests in a year.

These crops, which require much water and long hot weather for their growth, are sown (in June or early July) with the commencement of southwest monsoon and are harvested by the end of monsoon or autumn (September/October). The main kharif crops include rice, jowar, maize, cotton, groundnut, jute, hemp, tobacco, bajra, sugarcane, pulses, forage grasses, green vegetables, chilies, groundnuts, lady's finger, etc.

These crops, grown in winter, require a relatively cool climate during growth and warm climate during germination of their seeds and maturation. Therefore sowing is done in November and crops are harvested in April-May. The major rabi crops are wheat, gram, and oilseeds like mustard and rapeseed.

'Cropping Pattern' is the relative proportion of cropped area under various crops in different parts of the country at a particular period of time.

Some of the characteristic features of cropping pattern in India are:Amazing variety of crops

In Eastern India, east of 800 east longitude and in the coastal lowlands, especially the western coast, south of Goa, rice is the predominant crop. Tea and jute are the major crops of East India. West of 800 east longitude and north of Surat (where rainfall is below 100 cm) jowar, bajra, pulses, cotton, and groundnut are the chief crops in the plateau; and wheat including pulses, gram, cotton, oilseeds, jowar, bajra and in irrigated areas sugarcane are all grown in the alluvial plains of Uttar Pradesh, Punjab, and Haryana.The preponderance of food over non-food crops

About three-fourths of the total cropped area is under food crops. Among the food crops the chief crops grown are rice, wheat, and millets with some maize and barley, occupying about 70 percent of net sown area. Pulses come next in the area followed by oilseeds. The substantial area also lies under tobacco, potatoes, fruits and vegetables, tea, coffee, rubber and coconut but their share in the total cropped area is relatively small.The stone fruits, apricots, peaches, grapes, melons are found in the north in mountains and uplands.

Organic FarmingOrganic farming is natural farming which is based on the principles of no plowing, no fertilizer or prepared compost, no weeding or tillage, and no pest control but only sowing and harvesting and increasing the fertility of soil through biological residues. 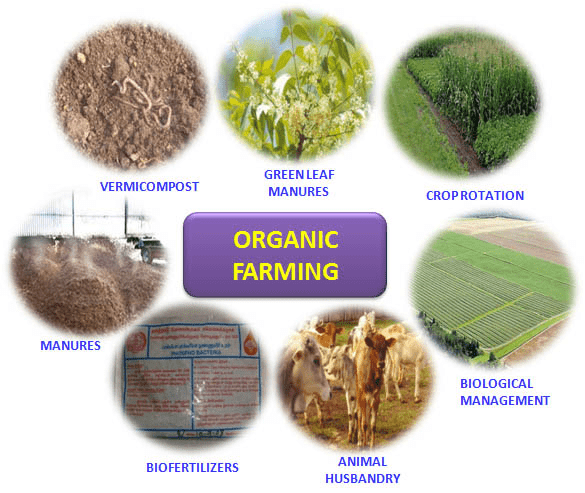 In its developed form, it seeks to rely on biological processes to obtain high quality and yields which are often as good as those achieved using modern agricultural techniques.

Advantages of Organic Farming(i) Reduced pollution(ii) Less energy is used(iii) Since no chemical pesticides, hormones, and fertilizers are used, residues from these substances are no longer a danger(iv) Less mechanization is used(v) Less occurrence of pest incidence due to absence of fertilizers and pesticides,(vi) Yields on par with modern farming(vii) Food fetches more price than that produced from modern farming; and(viii) Is an excellent method of sustainable agriculture.

It is an agricultural system in which a patch of forest is cleared of trees and most vegetation, to be cultivated for few years until the fertility is seriously reduced. The site is then abandoned and a fresh site is cleared elsewhere.

Cleared vegetation is usually burned (slash and burn) and crops planted in the fertile ashes. 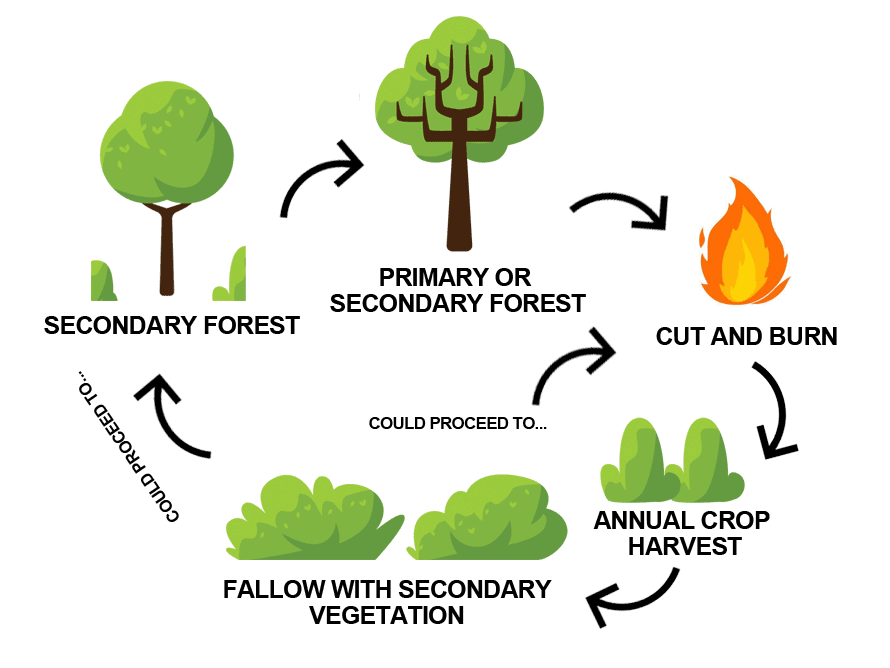 Even after total irrigation potential is realized by the close of the century (2000 A.D.) there will be nearly 50 percent of the total arable land will continue to be rainfed.

The bulk of the crops like rice, jowar, bajra, other millets, pulses, oilseeds, and cotton are grown in this area under rainfed conditions. 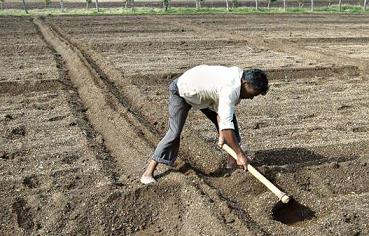 (i) Rainfed wetland farming is undertaken where rainfall is adequate and fairly well distributed during the crop season.

(ii) Rainfed dryland farming where agricultural activity is under low rainfall conditions which is erratic as well as concentrated in a short period. The water balance is frequently negative and moisture conservation is very essential here as compared to drainage of excess rainwater in the rainfed wetlands.

Rainfed agriculture is characterized by erratic and unpredictable rainfall. This results in wide fluctuations in the production performance of crops in these areas. The soils of these areas are affected by erosion which results in poor moisture-holding capacity besides impoverishment of soil in terms of nutrients. This makes the soil less productive and greater investment in terms of conservation and improvements.A wide variety of crops are grown in these areas which are directly dependent on the availability of a number of growing days. These are characterized by low production and low productivity.

Some of the improvements that have been introduced to increase the yield and production in the rainfed areas include soil and rainwater management; crop management; efficient cropping systems; and adoption of alternative land-use systems such as the adoption of ecologically benign, economically viable, operationally feasible and socially acceptable cropping systems involving the cultivation of high yielding predominant crops of different regions. The government has given high priority to the development of dryland areas and, therefore, several programs and projects have been launched for the utilization of the potential of these areas.

Arid ZoneArid zone are those regions which have very low annual rainfall, dry climate, high rate of evaporation and always have water deficiency. 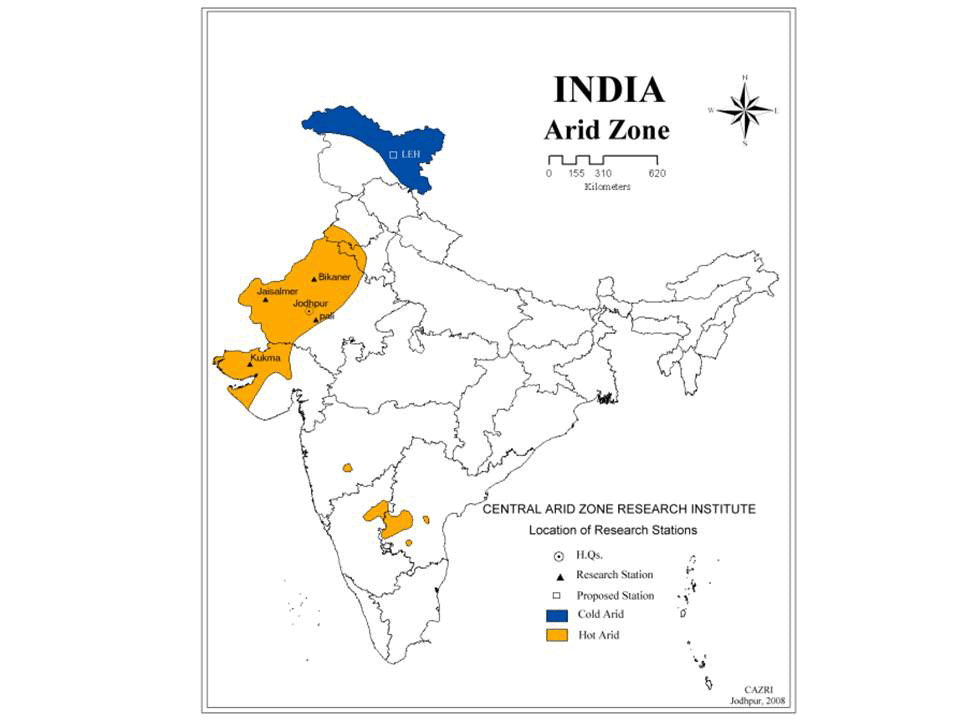 (i) The hot arid region of India is spread over 31.7 million hectares–61% of it is in west Rajasthan and 20% in Gujarat, the rest being in Haryana, Punjab, and Karnataka. The rainfall varies from 0-40 cm.(ii) The cold arid region is spread over Ladakh in J & K. The rainfall varies from 0.2 - 4cm. The agricultural season in the region is limited to about five months a year due to high aridity and low temperature.In the hot arid zones, the hot climate and shortage of water hamper agriculture. Only some drought-resistant varieties of crops can be grown through cautious and scientific management of scarce groundwater. Fruits like ber and pomegranate and fuelwood trees like acacia can be grown here. However, animal husbandry involving sheep, goats, camels is best suited for this region.In the cold arid region, the problem is the same. Some cereals, oilseeds, and fodder crops that mature in a short period and withstand severe cold can be cultivated. Yak and pashmina goats can be best reared in these regions.