In order to meet the needs of a growing population, agricultural production and protection of technology have to play a crucial role. Substantial food production is lost due to insect, pests, weeds, rodents, nematodes and during storage. Pesticides are now basic needs for agriculture production. Almost every country in the world uses pesticides. Pesticides industry inspite of various hazards has been playing important role in green revolution. An appreciable amount of food is lost due to insect pests, plant pathogens, weeds, rodents, birds and in storage. Pesticides include insecticides, fungicides, herbicides, rodenticides, nematicide at different stages of agricultural production

Pesticides industry has developed substantially and has contributed significantly towards India’s agricultural and public health. In value terms the size of Indian pesticide industry is $3.8 billion in the year 2011. India is predominant exporter of pesticide to USA, Europe and African countries.

Agriculture is the lynchpin of the Indian economy. Apart from fertilizers, pesticides played important role in the green revolution during the last five decades. Indian exports of agrochemicals have shown an impressive growth over the last five years. India is one of the most dynamic generic pesticide manufacturers in the world with more than 60 technical grade pesticides are manufactured indigenously by 125 producers consisting of large medium scale enterprises including about 10 multinational companies and more than 500 pesticides formulators spread over the country .

The Indian Pesticide industry with 85,000 metric tonnes (MT) of production during financial year (FY) 07 is ranked second in Asia (behind China) and twelfth globally. In value terms, the size of the Indian pesticide industry was estimated at Rs.74 bn for 2007, including exports of Rs. 29 bn. Though pesticides have made us self-sufficient in our food needs, the per hectare consumption of pesticides in India is very low Pesticides which include fungicides, herbicides, rodenticides, miticide, nematicide are basically derived from various chemicals which are initially manufactured as technical grade products and later they are converted into approved formulations (powder, emulsions, concentrates).

The Indian pesticide industry is characterized by low capacity utilization. The present total installed capacity is 146,000 tonnes and has low capacity utilization of <60%. Table M-IX 1.1 shows the profile of pesticide of Indian industry. The industry suffers from high inventory owing to seasonal and irregular demand on account of monsoons. There is a marked difference in the consumption pattern of pesticides in India vis-a-vis the rest of the world. Insecticides accounts for 76% of the total domestic market on the other hand, herbicides and fungicides have a significantly higher share in the global market. Crops like cotton wheat and rice together account for 70% of total agrochemical consumption. The consumption of pesticide is low in comparison to other countries. Total consumption of pesticides is given in Figure M-IX 1.1 [Agrochemical sub group of Indian Chemical Councils]. Profile for Installed and production of major chemicals are shown in Figure M-IX 1.2.

Pesticide consumption is lowest (600g/ha) in India when compared to the world average consumption of 3000 g/ha. India is the 4th largest producer of agrochemicals after USA, Japan and China. There are around 125 technical units, 800 formulation units in India. Out of Rs 1,80,000 crore global market, the share of global market is of Rs 1,20,600 crore. Figure M-IX1.3 shows Indian Agro-Chemical Industry: Changing crop wise market. Population increasing, area decreasing food production keeping upward trend is given in Figure M-IX1.4. Agrochemical Market: Segment wise is shown in Table M-IX 1.2 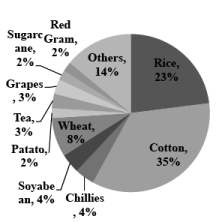 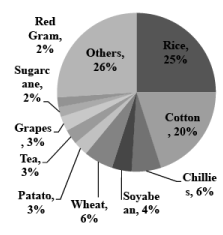