The document Doc: Albugo Or Cystopus NEET Notes | EduRev is a part of the NEET Course Biology Class 11.
All you need of NEET at this link: NEET

Note: Albuginaceae is a monotypic family. It includes only single genera Albugo.

It is an obligate, inter cellular parasite.

It cannot be grown on culture medium. It causes "White-rust disease in the plants of family cruciferae or brassicaceae. It shows specificity towards the host.

Etiology : - Study of causes of disease in body is called etiology.

(1)  The main reason of hypertrophy is the formation of sex organs in the intercellular spaces of host.

The study of spread of disease is called Epidemiology. 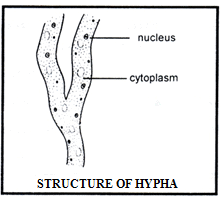 Mycelium is branched, aseptate, coenocytic. (Septa are only formed in mycelium during reproduction).

The hyphal wall is made up of cellulose.

Reserve food material is present in the form of glycogen and oil globules.

Hyphal network is found in the intercellular spaces of the host.

In the apical region of haustorium dense cytoplasm, found but nuclei are absent.

The shape of haustorium have taxonomic importance.

It's mycelium is stained by cotton blue and mounted by lactophenol. 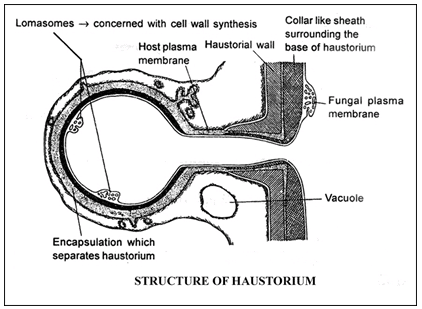 Conidia are dispersed by air.

Free zoospores swim in water for few minute and finally they reaches on the surface of host, then after withdraw their flagella and round off and secretes a wall around itself.

Deflagellated zoospores with wall germinates through the germ tube. This germ tube enter into the host tissue through stomata or through the teared epidermis and form mycelium.

Zoospores of Albugo are uninucleated, reniform or bean-shaped and biflagellated.

Flagella are located on the lateral side of zoospore which are unequal in length.

Out of them small the hairy flagellum is called Tinsel or Pantonematic or Flimmergersal.

Antheridium and oogonium develops very close in the mycelium. The terminal end of fertilization tube burst and introduces a single nucleus along with some cytoplasm.

Male nucleus fuses with the female nucleus and results in the formation of diploid nucleus. Now it is known as zygote.

Prior to fertilization a mass of protoplast is found in ooplasm. It is called coenocentrum. Which is formed by granular cytoplasm.

After the fertilization, zygote secretes a thick tri-layered wall around itself and now it is called oospore (2N).

On returns of favourable conditions the 32 nuclei of oospore undergoes repeated divisions to form 100 or more nuclei.

These zoospores are coming in contact with a suitable host (seedling plants) settle down on the host and infect them.

The initial stage of the disease during the growth period is called primary infection and it takes place through the soil born oospores.

According to Stevens all the structures of Albugo are diploid except gamete.

According to Sansome and Sansome meiosis division takes place at the time of gamete formation i.e. gametic meiosis found in Albugo. In Albugo meiosis not takes place in oospore.

1.   By crop rotation : - Primary infection can be checked through the growing of crops one after another crops. This is the best method to control the white – rust.

2.   By removal of infected plants from the field. Through this it can be eradicated.

3.   By application of fungicides – Such as – Bordeaux mixture. It is composed of

Diplontic type (according  to modern mycologists)/ Haplontic (According to old mycologists)