The document Algae: Chlorophyceae (Green Algae) Notes | Study Biology Class 11 - NEET is a part of the NEET Course Biology Class 11.
All you need of NEET at this link: NEET

Algae exist in environments ranging from oceans, rivers, and lakes to ponds, brackish waters (both fresh & marine) and even snow. Algae are usually green, but they can be found in a variety of different colours.

Definition: “Alga is a term that describes a large and incredibly diverse group of eukaryotic, photosynthetic life forms. These organisms do not share a common ancestor and hence, are not related to each other (polyphyletic).” 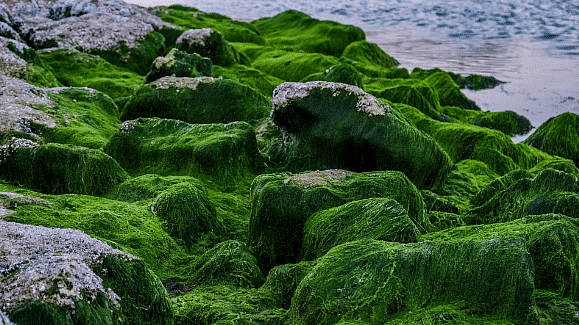 Algae can be Unicellular and Multicellular

Try yourself:These questions consist of two statements, each printed as Assertion and Reason. While answering these questions, you are required to choose any one of the following five responses.

Assertion: Algae and fungi are classified as thallophytes.
Reason: They both are autotrophs.

Thallophyte includes plants in which body is not differentiated into root, stem and leaves. Algae and fungi have thallose plant body. Algae are autotrophs i.e. they can prepare their own food by photosynthesis. while fungi are heterotrophs.

Sexual Reproduction is of three types:

Volvox is a unicellular green alga found in freshwater bodies. It is photosynthetic in nature. It forms colonies of around 50,000 cells which are spherical in shape.

Q.2. Which of the following pairs include unicellular algae? (NEET 2020)

So, the correct answer is 'Chlorella and Spirulina'

To practice questions on the topic of "Green Algae", you just read, attempt the tests given below:

The document Algae: Chlorophyceae (Green Algae) Notes | Study Biology Class 11 - NEET is a part of the NEET Course Biology Class 11.
All you need of NEET at this link: NEET