What are Alkaline Earth Metals?Elements whose atoms have their s-subshell filled with their two valence electrons are called alkaline earth metals. Their general electronic configuration is [Noble gas] ns2. They occupy the second column of the periodic table and so-called as group two metals also.Examples of Alkaline earth Metals: Beryllium (Be), Magnesium(Mg), Calcium (Ca), Strontium (Sr), Barium(Ba) and Radium (Ra).They occupy successive periods from first to seven of this radium is a radioactive element. Alkaline earth metals form amalgams with mercury. 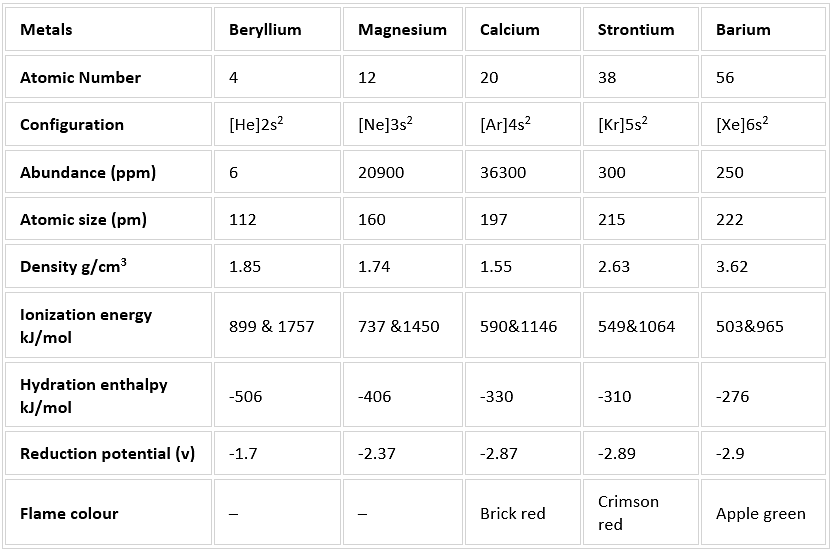 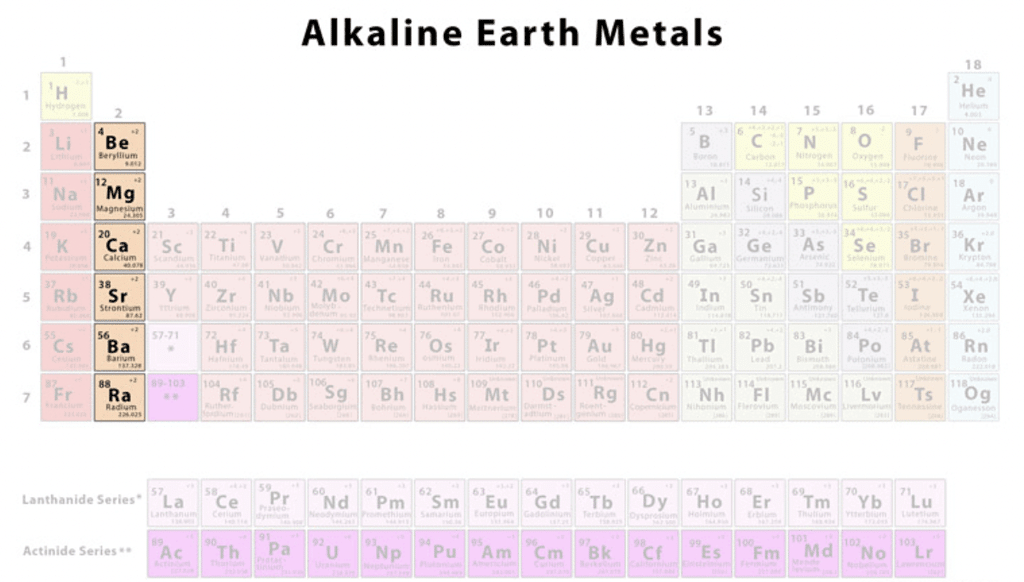 Physical Properties of Alkaline Earth MetalsDown the column, nuclear charge increases and a new orbital is added to each alkaline earth atom.

Why Alkaline Earth Metals are Denser than Alkali Metals?Radii being smaller, the volume of the atoms are also smaller. In addition, due to the presence of two valence electrons, atoms have stronger metallic bonding. Hence, alkaline earth metals have more density and harder than alkali metals.Density generally increases from magnesium to radium while calcium has the lowest density among the alkaline earth metals.

So group two alkaline earth elements are all divalent electropositive metals and exhibit a fixed oxidation state of 2. Ionization energy needed for the removal of the valence electron will be highest for the small beryllium atom.With increasing atomic size, the valence electron gets shielded by the inner electrons and becomes easily removable with less energy requirement. Hence the ionization energy decreases with an increasing atomic number or atomic size.Example: IEBe > IEMg > IECa > IESr > IEBa

Note: In the same period ionization energy increases due to decreasing the ionic size and increasing nuclear charge.

Flame ColourationIn Alkaline Earth Metals, the energy needed for an electronic transition between the available energy levels falls in the visible spectrum region. So, on heating, except beryllium and magnesium produce a characteristic colour to the flame reflective of their emission or absorption spectrum and can be used for their identification.Example: Ca – Brick Red colour, Sr – Crimson Red colour, and Ba – Apple Green colour.

Chemical Properties of Alkaline Earth MetalsThe key features of the compounds of alkaline earth metals and their general characteristics are discussed in this subsection.1. HydridesBeryllium does not react with hydrogen directly. Beryllium hydride can be prepared by the reduction of beryllium chloride with lithium aluminium hydride.2BeCl2 + LiAlH4 → 2BeH2 + LiCl + AlCl3Beryllium and magnesium form covalent hydrides where each hydrogen is connected to two metal atoms. This is an example of molecules with three centres sharing only two electrons called “banana Bond”.

Calcium, strontium and barium react with hydrogen to form metallic hydrides. Metallic hydrides give hydrides ions.M + H2 → 2MH2 → M+ + 2 H–Hydrides react violently with water to release hydrogen. Calcium hydride called “Hydrolith” is used for producing hydrogen.CaH2 + 2H2O → Ca(OH)2 + H22. Reaction of Alkaline Earth Metals with WaterBeryllium does not react with water even at higher temperatures. Magnesium reacts with hot water only to form hydroxides and releasing hydrogen. Magnesium gets a protecting coat of its oxide, that prevents any further attack by the water molecules. Other alkaline earth metals react with even cold water to liberate hydrogen.3. CarbidesAlkaline earth metals and their oxides, except beryllium, react with carbon to yield carbides. Carbides react with water to liberate acetylene gas and hence used as a source for the gas.M + 2C → MC2 MC2 + 2H2O → M(OH) 2 + C2H2

4. OxidesBeryllium reacts with oxygen only above 600°C. Magnesium and strontium burn in oxygen to form oxides while Barium forms peroxides.BeO and MgO are more covalent while the other oxides are ionic. Beryllium oxide is amphoteric, magnesium oxide and calcium oxide are weakly basic while other oxides are basic.5. HydroxidesOxides react with water to ultimately yield hydroxides. The basic nature and the thermal stability of hydroxides increases from beryllium to barium.6. Carbonates and BicarbonatesThe hydroxides react with carbon dioxide to carbonates.M(OH)2 + CO2 → MCO3 + H2OBicarbonates are soluble in water and exist only in solution. Carbonates exist as solid and insoluble in water. The solubility of carbonates decreases from Be to Ba. In the presence of carbon dioxide, carbonates dissolve by forming bicarbonates. Ionic character and the thermal stability of the carbonates increases from Be to Ba.

7. SulphatesContrary to alkali metal sulphates, beryllium sulphate is water-soluble. The smaller size and the charge density increases the hydration energy of the beryllium sulphate leading to more solubility. In other sulphates, increasing lattice energy and the decreasing hydration energy (due to increasing size) decreases their solubility form BeSO4 to BaSO4.Solubility of BeSO4 > MgSO4 > CaSO4 > SrSO4 > BaSO4

8. NitratesNitrates can be prepared by reacting the corresponding oxides, hydroxides and carbonates with nitric acid. Nitrates are soluble in water. On heating, Beryllium nitrate forms nitrite and, other nitrates yield oxide, liberating brown fumes of nitrogen dioxide.2M(NO3)2 → 2MO + 4NO2 + O29. HalidesAlkaline earth metals from calcium to barium react with all halogens to form solid ionic halides with a definite crystal structure. Reactivity decreases from fluorine to iodine. Beryllium halides are an exception with more covalent bonding because of the high polarization of the small covalent ion on the electron cloud of the halogen anion as indicated by the Fajan’s rule.In the gas phase, Beryllium halides exist as individual molecules and in the solid phase, they form chains of Be-X.

Fluorides are insoluble in water. The solubility of other halides decreases with increase in ionic size i.e. from Mg2+ to Ba2+. Halides are hygroscopic and have the water of crystallization in their solid state (CaCl2.6H2O). Fused halides are used as dehydrating agents.

Anomalous behaviour of BerylliumBeryllium has more covalent nature due to its smallest size, Highest ionization energy, high electropositive nature and strongest polarizing nature. Because of these, Beryllium differs from other alkaline earth metal properties.

Uses of Alkaline Earth Metals1. Calcium CarbonateIt occurs naturally in many forms as marble, limestone, chalk, coral calcite etc. The pure form is made by: