Amino Acids are the organic compounds which combine to form proteins, hence they are referred to as the building components of proteins. 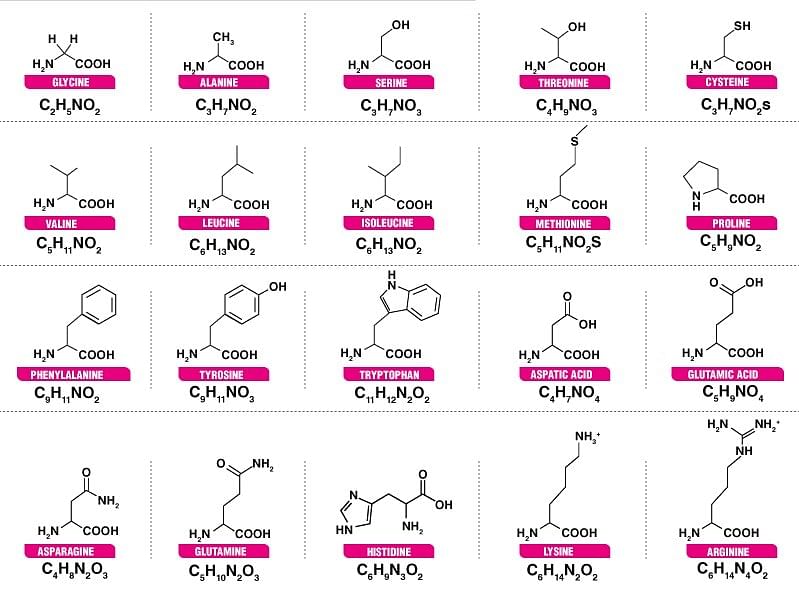 Out of 20 amino acids, our body can easily synthesize a few on their own and are called non-essential amino acids. They include alanine, asparagine, arginine, aspartic acid, glutamic acid, cysteine, glutamine, proline, glycine, serine, and tyrosine.

Apart from these, there are other nine amino acids, which are very much essential as they cannot be synthesized by our body. They are called essential amino acids and they include isoleucine, histidine, lysine, leucine, phenylalanine, tryptophan, methionine, threonine, and valine.

There are 20 naturally occurring amino acids and all have common structural features – an amino group (-NH3+), a carboxylate (-COO-) group, and a hydrogen-bonded to the same carbon atom. 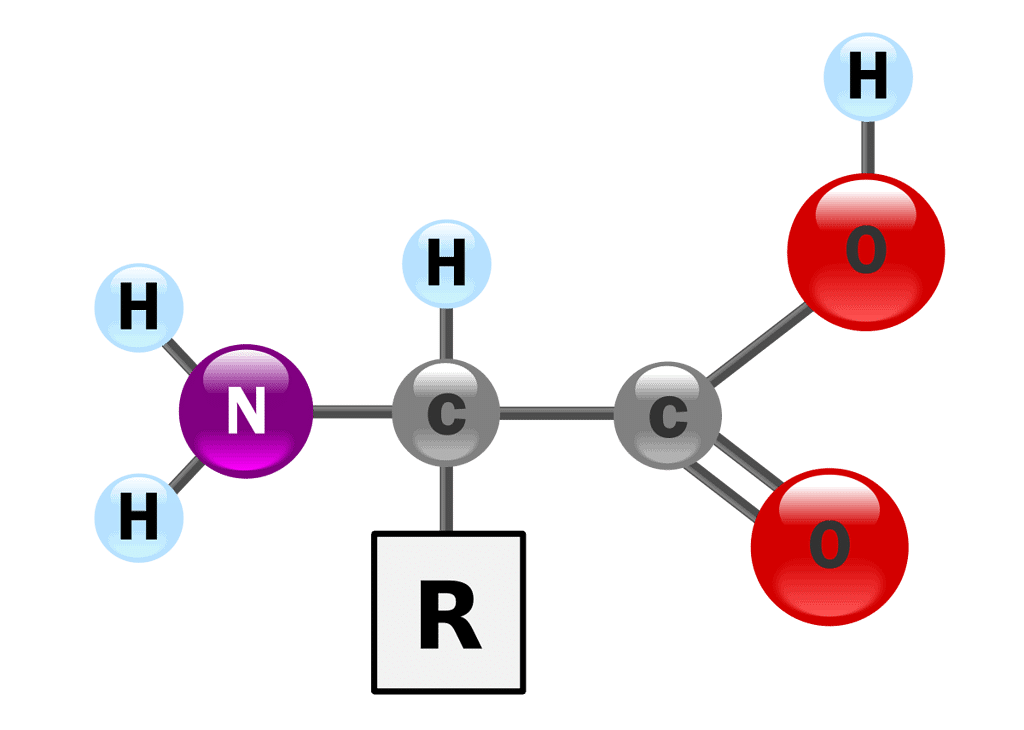 They differ from each other in their side-chain called the R group. Each amino acid has 4 different groups attached to α- carbon.

These carboxyl and amino groups are combined in peptide linkage. 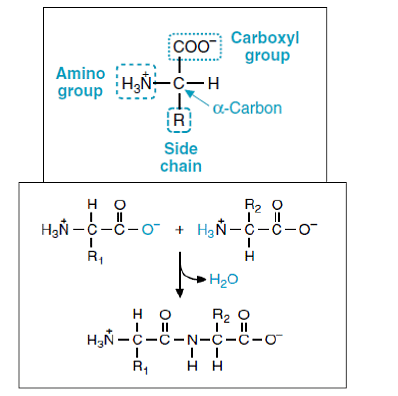 They classified according to the side chain:

1. Amino acids with Non-polar side chains.

5. Amino acids with acidic side chains.

The side chain of proline and its α-amino group form a ring structure. Proline gives the fibrous structure of collagen, and interrupts the α-helices found in globular proteins. 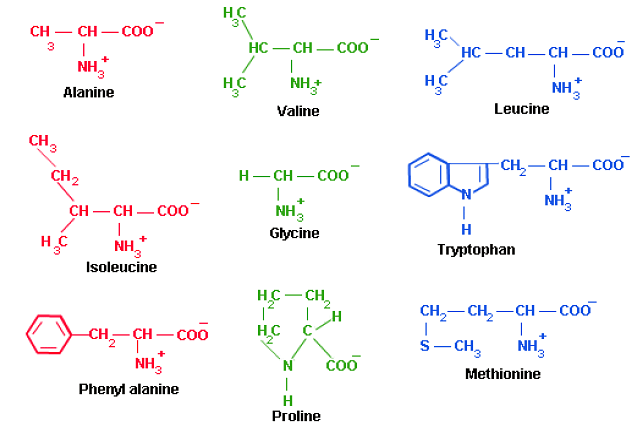 Aromatic side chains are non-polar so that they can participate in hydrophobic interactions. Tyrosine is important in some enzymes. Most proteins absorb light at a wavelength of 280 nm due to aromatic groups. 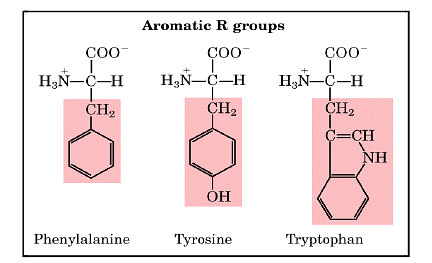 More hydrophilic as they form hydrogen bonds with water. They include serine, threonine, cysteine, asparagine, and glutamine. Cysteine contains a sulfohydryl group (-SH), an important component of the active site of many enzymes. 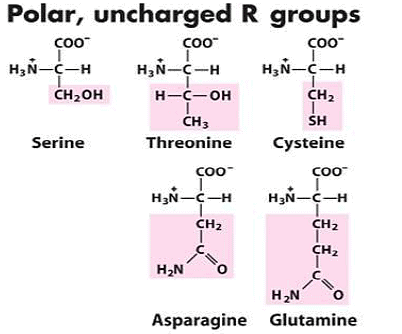 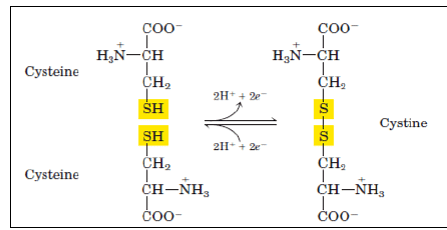 The R groups have a significant positive charge. Lysine has a second positive amino group at the ε position on its (R) chain. Arginine has a positively charged guanidine group. Histidine has a positive imidazole group which facilitates the enzyme-catalyzed reaction by serving as a proton donor/acceptor.

Aspartic and glutamic acid are proton donors. At neutral pH, the side chains of these amino acids are fully ionized. They have a negatively charged carboxylate group (-COO-) at physiologic pH.

Amino acids exist as zwitterions, a dipolar ion that results from an internal acid-base reaction.

[Note that the net charge of the zwitterion is zero].

The isoelectric point is the pH at which an amino acid has a net charge of zero.

In electrophoresis, an electric current is used to separate a mixture of amino acids, and

Example: With an electric current, a mixture of lysine, aspartate, and valine are separated.

Acid-hydrolysis of the peptide (6 M HCl, 24 hr) gives a mixture of amino acids. The mixture is separated by ion-exchange chromatography, which depends on the differences in pI among the various amino acids. Amino acids are detected using Ninhydrin. The automated method requires only 10–5 to 10–7 g of the peptide.

Partial Hydrolysis of Peptides and Proteins

Trypsin is selective for cleaving the peptide bond to the carboxyl group of lysine or arginine.

Chymotrypsin is selective for cleaving the peptide bond to the carboxyl group of amino acids with an aromatic side chain.

The amino sequence is ambiguous unless we know whether to read it left-to-right or right-to-left. We need to know what the N-terminal and C-terminal amino acids are. The C-terminal amino acid can be determined by carboxypeptidase-catalyzed hydrolysis. Several chemical methods have been developed for identifying the N-terminus. They depend on the fact that the amino N at the terminus is more nucleophilic than any of the amide nitrogens.

The key reagent in Sanger's method for identifying the N-terminus is 1-fluoro-2,4-dinitrobenzene.

1-Fluoro-2,4-dinitrobenzene reacts with the amino nitrogen of the N-terminal amino acid.

Acid hydrolysis cleaves all of the peptide bonds leaving a mixture of amino acids, only one of which (the N-terminus) bears a 2,4-DNP group. 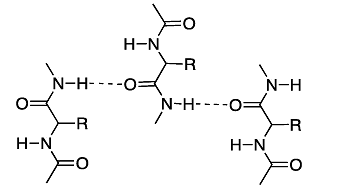