In this lecture you will learn the delays in following circuits

We know that digital circuits are formed by two type of components- (1) Combinational circuit and (2) Sequential Circuits. Combinational circuit components are used only for logic implementation and can' t store the bits i.e. work as memory. But Sequential circuit components can store bits, hence used as memory elements. How fast a circuit (containing memory elements i.e sequential elements) can store or retrieve the value from its memory depends upon the delays in each of such basic sequential elements e.g. flip-flops etc.

In coming sections, We will analyze basic functionalities and delays of such sequential elements-

Structure: This circuit consist of a multiplexer and an inverter . Data is fed at the i1 input of mux where as the output is given to

the inverter, which in turn is fed to the i2 input of the mux. Clock is given to the select input.

Working:When clock = '0' the data is passed on to the output.When clock = '1' the data gets latched.This circuit can be converted into positive clock latch by giving an inverted clock at the select input. Note: Latch = level senstive Flip flop = edge triggered.

Structure: Using two nor gates this circuit is designed .In this circuit one of the input of nor gate is 'R' .Other input is 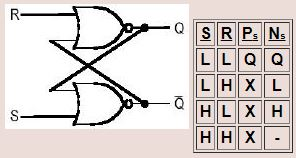 and the output of the gate is Q. In the second NOR gate the inputs are S  and

and the output is Q. Thus we see that the two inputs are connected in feedback configuration.

Hold time: it is the time for which the data must be held after the arrival of the clock edge. Sufficient set up and hold time must be provided to prevent contention of data.

Structure: Here the output voltage of ig1 is equal to the input of ig2, and vice-versa. Fig 20.41 show the latch using two inverters.

Working: Notice that the input and output voltages of ig2 correspond to the output and input voltages of ig1 respectively. It can be seen that the two voltage transfer characteristics intersect at three points. Two of them are stable, while the middle point is unstable. The gain at the stable points is less than unity. Thus if input is at any of these points, it remains stable. The voltage gain at the third operating point is greater than unity. However if the input has a small perturbation, it is amplified and led to any of the two stable states. Hence this state is called metastable state. Since the circuit has two stable operating points it is called bistable. The potential energy is at its minimum at two of the three operating points, since the voltage gains of both inverters are equal to zero. By contrast, energy attains maximum value at the operating point at which the voltage gains of both inverters are maximum. Thus the circuit has two stable states corresponding to the two energy minima, and one unstable state corresponding to the potential energy maximum. 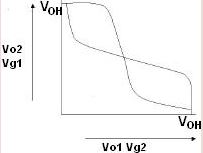 where gm represents transconductance of inverter.. The gate charges q1 and q2 are -

These equation In terms q1 & q2 is given as below-

Combining equations eq5 and eq6, we will get

This expression is simplified by using To, the transient time constant

The time domain solution is

Solution for the problem:1. The inverter should not be identical.2. The lines connecting the two inverters should be of different lengths.

Note: 1.this same circuit can be used as static ram. After the data which is fed has started circulating, the input can be removed since it keep on circulating.2. This circuit is also called as transparent latch or level sensitive latch.

Advantage In this circuit is we need to use just 8 transistors.

Working: When the clock input is low, then the output is in high impedance state. So we are not able to get any data at the output. So the earlier data which was stored at the output capacitance is latched. In the next clock phase, the output terminal is connected to the pull-down or pull-up networks. So the data which is at input of the pull-down or pull-up network is stored at output in its inverted form. In the second part of the circuit the same process takes place. Thus the data is shifted by a bit, and acts as a 1-bit shift register.

Disadvantage: 1) There is a problem of charge sharing in this circuit.2) This is used for slower circuits. Note: Clock frequency <= 1/(5*propagation delay).