AreasAn area is a set of routers that are administratively configured to exchange link-state information with each other. There is one special area—the backbone area, also known as area 0. An example of a routing domain divided into areas is shown in Figure . Routers R1, R2, and R3 are members of the backbone area. They are also members of at least one no backbone area; R1 is actually a member of both area 1 and area 2. A router that is a member of both the backbone area and a nonbackbone area is an area border router (ABR). Note that these are distinct from the routers that are at the edge of an AS, which are referred to as AS border routers for clarity. All the routers in the area send link-state advertisements to each other, and thus develop a complete, consistent map of the area. However, the link-state advertisements of routers that are not area border routers do not leave the area in which they originated. This has the effect of making the flooding and route calculation processes considerably more scalable.

For example, router R4 in area 3 will never see a link-state advertisement from router R8 in area 1. As a consequence, it will know nothing about the detailed topology of areas other than its own. 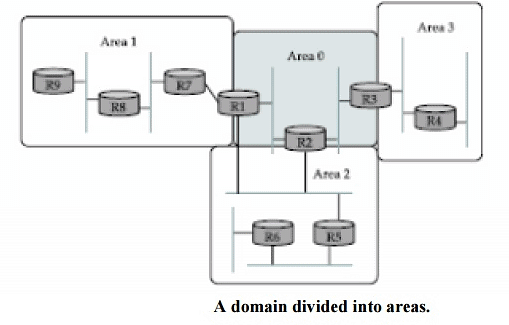 In the more general case, the goal is to deliver packets as directly as possible from sending node to mobile node without passing through a home agent.This is sometimes referred to as the triangle routing problem since the path from sender to mobile node via home agent takes two sides of a triangle, rather than the third side that is the direct path. The basic idea behind the solution to triangle routing is to let the sending node know the care-of address of the mobile node.

The sending node can then create its own tunnel to the foreign agent. This is treated as an optimization of the process just described. If the sender has been equipped with the necessary software to learn the care of address and create its own tunnel, then the route can be optimized; if not, packets just follow the suboptimal route.Mobile routing provides some interesting security challenges.

For example, an attacker wishing to intercept the packets destined to some other node in an internetwork could contact the home agent for that node and announce itself as the new foreign agent for the node. Thus, it is clear that some authentication mechanisms are required.When a home agent sees a packet destined for one of the mobile nodes that it supports, it can deduce that the sender is not using the optimal route. Therefore, it sends a binding update message back to the source, in addition to forwarding the data packet to the foreign agent.The source, if capable, uses this binding update to create an entry in a binding cache, which consists of a list of mappings from mobile node addresses to care-of addresses. The next time this source has a data packet to send to that mobile node, it will find the binding in the cache and can tunnel the packet directly to the foreign agent.