A set of numbers whose domain is a real number is called a SEQUENCE and sum of the sequence is called aSERIES. If

is a sequence, then the expression

The nth term of a sequence is usually denoted by TnThus T1 = first term, T2 = second term, T10 = tenth term and so on.

There are three different progressions

The nth term of an A.P is given by the formula

Where ‘l ’ is the last term of the series.

Ex.1 Find the series whose nth term is

As the common differences are equal∴The series is an A.P. 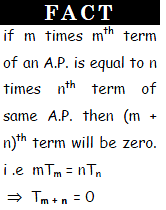 Properties of an API. If each term of an AP is increased, decreased, multiplied or divided by thesame non-zero number, then the resulting sequence is also an AP.

II. In an AP, the sum of terms equidistant from the beginning and end is always same and equal to the sumof first and last terms as shown in example below.

and b is called Arithmetic mean of a & c

Ex.4 A student purchases a pen for Rs. 100. At the end of 8 years, it is valued at Rs. 20. Assuming that the yearly depreciation is constant. Find the annual depreciation.