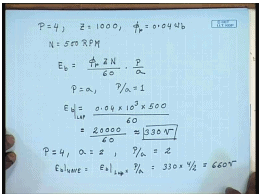 Let us see, an example of how to calculate the induced voltage in a dc machine armature. Let us consider, dc machine with an armature winding which is own for, let say 4 pole equal to 4 and the total number of armature conductor z equal to let us say 1000. The flux per pole phi p equal to 0.04 Weber and the machine is rotating at a speed N equal to 500 R P M. So, what will be the induced voltage? This is the simple application of the formula E b equal to phi p z N by 60 into p by a. Since this is lap connected armature therefore, p equal to a and p by a equal to 1.Therefore E b equal to phi p is 0.04 into z is 1000 so that is 10 to the power 3 into 500 divided by 60, that is equal to 20000 by 60 approximately equal to 330 volts. Now, if the same armature is beyond as a wave winding, two circuit wave winding in which case the poles will be remain same number that is four, but now for the wave connection, it will be than a equal to 2 therefore, p by a will now be 2 and hence this is for lap connection E b for wave connection will be E b lap multiplied by p by a that is 330 into 4 by 2 that is equal to 660 volts, so the wave connection the machine will generate higher voltage, but if the power increase. Let us see, the same conductors are connected either as wave or else lap. So, due to connection their current carrying capacity does not change.(Refer Slide Time: 04:17) 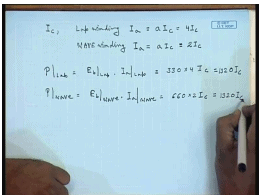 So, let us say, the current carrying capacity is the conductor is I c, then for lap connection armature current I a, maximum armature current I a will be a into I c that is 4 I c, where as for wave winding I a will still be given by a I c, but now a equal to 2 so this is the 2 I c. So, power for the lap is E b lap into I a lap equal to 330 into 4 I c, power wave equal to E b for wave connection into I a wave connection this will be 660 into 2 I c. This is equal to 1320 I c; this is also 1320 I c.So, we see although the generated voltage at the same speed will be higher for the wave connected machine its armature current will reduce and hence the total power produce as a generator either due to wave connection or due to lap connection will remain same, but depending on the required voltage. We chose the armature connection that is if a higher voltage machine is required higher voltage localized machine is required then wave winding will be preferred if a low voltage high current is required then lap winding will be preferred. So, far we have seen the effect of field pool only on the generated voltage and torque; however, in a practical d c machine both the field winding and the armature winding carries current simultaneously. We have seen that the current flowing in the field winding produces a magnetic flux, the same is to for the armature winding the current flowing to the armature will also produce a flux density wave form and gives to flux density wave form will interact.So, in a practical d c machine they induce voltage and torque will be due to the resultant flux of these two from these two sources that is a field flux and the armature flux. The armature flux will modify the field flux wave form to some extend and this is called armature reaction.(Refer Slide Time: 07:43) 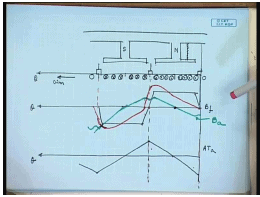 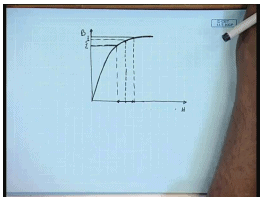 Let us considered the B H curve of the magnetic path of the d c machine, normally for proper utilization of the iron material, the normal operating point due to field flux is already in the saturation zone of the B H characteristics. Now, on which if we apply a positive armature ampere turn under negative ampere turn of same magnitude we find that the change in the flux density are not same. That is increase in the flux density due to increase in the ampere turns is less than the decrease.Therefore what will happen due to same peak armature ampere turns which is negative on this edge and positive on this edge will not result in same amount of increase and decrease in the flux density wave form. That means, the while on this edge the flux density will reduce by substantial amount which is almost proportional to the A T on the other edge the increase will not be as much. So, the decrease will be more than the increase therefore, there will be in net the magnetization of the field flux that is the flux per pole I p will reduce and hence the induced voltage will also reduced this is one problem.The other problem is that, we find that, the position of zero crossing of the resultant field wave form, field flux wave form is different from that of the zero crossing position of the field flux alone. The brushes are usually placed at the zero crossing of the field flux, but because of armature reaction the flux, resultant flux density at the position of the brushes is no longer zero, hence the coil that will be connecting to the brushes will not have a zero induce voltage at that time at the moment of commutation. Hence during commutation when we have seen that the coils are shorted the induce voltage will not be zero and there will be circulating current and associated problems, this is one disadvantage of armature reaction.The other disadvantage is even if this is not the voltage induced in every coil. We have found that discontinuous voltage is proportional to the flux density, because of this increase and decrease in the flux density wave from the instantaneous induced voltage in a coil will be far larger than there average value. Hence what will happen is the adjacent commutated segments will be subjected to a much larger tig voltage which may cause break down of the insulation between the commutated segments therefore, it is necessary to counter the effect of armature reaction in a d c machine. So, for that we need to find out what is the peak of the armature ampere turns. We know there are total e number z number of conductors.(Refer Slide Time: 27:09) 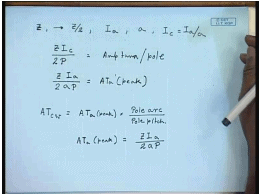 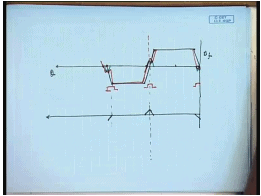 And hence the flux density wave form, so is the flux density wave form due to the field flux. The remaining armature reaction m m f after compensation by the compensating winding will be of this form. Hence there will be small armature m m f flux produced in the interpolar regions and the resultant flux density; I am still show a shift of what you call the magnetic neutral axis that is the flux density. The position where the brushes are normally kept will not be zero, this will give rise to some problem in commutation, which will discuss in more detail in the next class. And we will see how to use interpoles to cancel this remaining ampere turns at the interpolar axis.If we end this discussion let us look at a practice which is sometimes follow in a d c machine. We have seen that, due to armature reaction the magnetic neutral axis shifts accordingly sometimes the shift is applied to the brushes, that is if we look at the d c machine cross section schematically.(Refer Slide Time: 43:00) 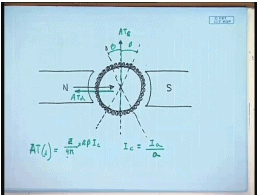