Simple Average (or Mean) is defined as the ratio of the sum of the quantities to the number of quantities.

is the mean. Average or mean is said to be a measure of central tendency.Example: 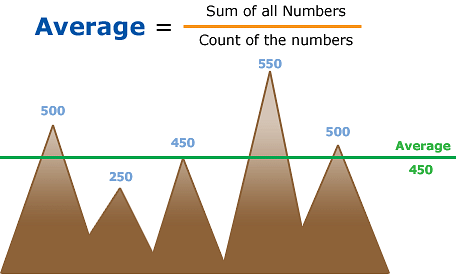 (e) None of these

Correct Answer is Option (d)The average of consecutive numbers is the middle number. If one more number is added to the list, the middle number moves 0.5 towards the right. So the answer is (d).

We can do the question by using both the Simple average & weighted average method.

Tip: Average Speed can never be double or more than double of any of the two speeds.

Example 5. The average of 10 consecutive numbers starting from 21 is:

View Solution
Question for Detailed Notes: Averages
Try yourself:While finding the average of ‘9’ consecutive numbers starting from X; a student interchanged the digits of second number by mistake and got the average which is 8 more than the actual. What is X?
Explanation

View Solution
Question for Detailed Notes: Averages
Try yourself:There are 30 consecutive numbers. What is the difference between the averages of first and last 10 numbers?
Explanation

Instructions for the next 3 questions:

Question for Detailed Notes: Averages
Try yourself: If all the students of the class have the same weight, which of the following is false?
Explanation

View Solution
Question for Detailed Notes: Averages
Try yourself:If one student from group A is shifted to group B, which of the following is necessarily true?
Explanation

Options (1) & (2) are not possible. Average of both cannot increase or decrease. Option (4) can be
eliminated because we are not sure, whether the average of A increases & B decreases or A
decreases & B increases or both remains unchanged. It depends on the weight of the student, who
shifted from A to B.

Option (3) is always true because even the student shifts from one group to other. The average
weight of the whole class does not change.

View Solution
Question for Detailed Notes: Averages
Try yourself:What is the average weight of the students in group D?
Explanation

We know only the no of students in each class, but we don’t know the average weight of any class,
we can’t find the answer.