The document Baics of Inverse Trigonometric Functions Mathematics Notes | EduRev is a part of the Mathematics Course Additional Topics for IIT JAM Mathematics.
All you need of Mathematics at this link: Mathematics

Different conventions are possible for the range of these functions for real arguments. Following the convention used by the Wolfram Language, the inverse trigonometric functions defined in this work have the following ranges for domains on the real line 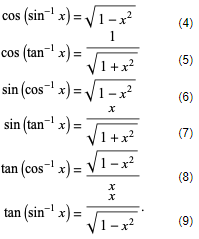 where equation (11) is valid only for x >0.
Complex inverse identities in terms of natural logarithms include