The document Bank Reconciliation Statement ( Part - 2) Commerce Notes | EduRev is a part of the Commerce Course TS Grewal Solutions - Class 11 Accountancy.
All you need of Commerce at this link: Commerce

Question 6: From the following particulars, prepare Bank Reconciliation Statement as on 31st December, 2008:(i) Debit balance as per Cash Book ₹ 10,000.(ii) A cheque for ₹ 500 issued in favour of Karan has not been presented forpayment.(iii) A bill for ₹ 700 retired by bank under a rebate of ₹ 20, the full amount ofthe bill was credited in the Cash Book.(iv) A cheque for ₹ 295 deposited in the bank has been dishonoured.(v) A sum of ₹ 800 deposited in the bank has been credited as ₹ 80 in the Pass Book.(vi) Payments side of the Cash Book has been undercast by ₹ 200.(vii) A bill receivable for ₹ 1,000 (discounted with the bank in November 2008) dishonoured on 31st December, 2008.ANSWER: 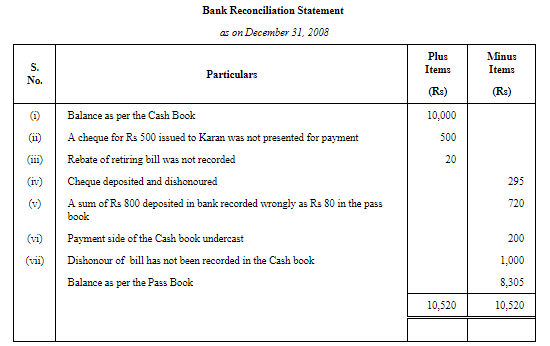 Prepare a Bank Reconciliation Statement as on 31st March, 2019.ANSWER: 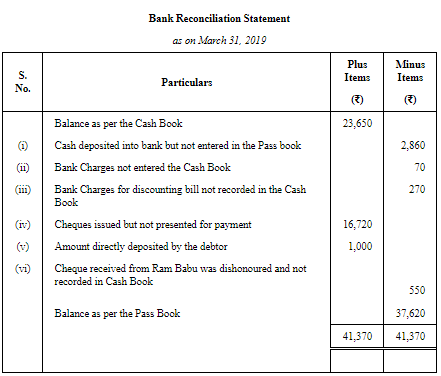 (iv) The bank charged ₹ 460 for its commission and allowed interest of ₹ 100 which were not mentioned in the Bank Column of the Cash Book.ANSWER: 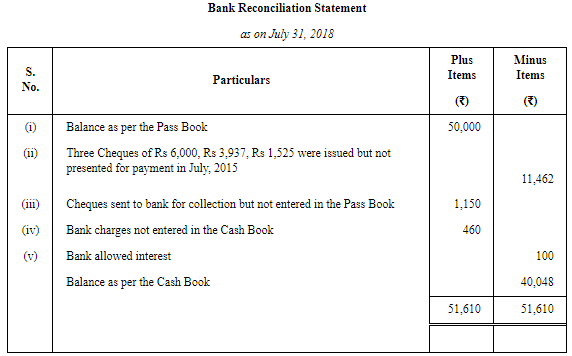 (ii) Before that date, you had issued cheques amounting to ₹ 1,500 of which cheques of ₹ 900 have been presented for payment.

(iv) There was a credit of ₹ 85 for interest on Current Account in the pass book. 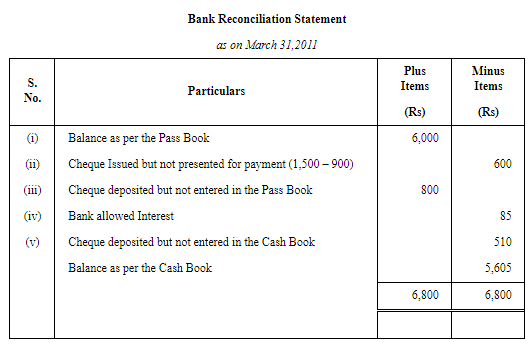