The document Basic Concept: Syllogisms & Explained with Examples LR Notes | EduRev is a part of the CAT Course Verbal Aptitude.
All you need of CAT at this link: CAT

A syllogism is a form of reasoning in which a conclusion is drawn from two or three given propositions or statements. It uses deductive reasoning rather than inductive reasoning. You have to take the given statements to be true, even if they are at variance from established facts.

Let us see an example of deductive reasoning:Statements:(a) All cats are dogs.(b) All dogs are birds.

Conclusion: All cats are birds.This conclusion is quite visible. But to solve complex problems we have some standard methods.

Following are the four major types of statements generally asked:

While deriving conclusions, the following points should be kept in mind:

Example1: Which of the two conclusions can be concluded on the basis of given statements?

I. Some scissors are parrots.

II. Some combs are parrots.

Solution: Now, in this case, the possible conclusion is: Some scissors are parrots (I to I), as the universal principle no. 4 says, that with two particular statements only I to I is possible. Therefore, only 1 conclusion is possible. Nothing else is possible. 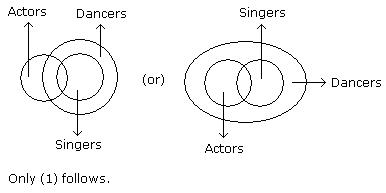 Example 2: Which of the two conclusions can be concluded on the basis of given statements?

I. Some flowers are lanterns.

II. Some candles are lanterns.

Three possible diagrams are shown above for the given statements. Conclusion II follows from all the three possible solutions.Therefore, conclusion II is true.

Example 3: Which of the two conclusions can be concluded on the basis of given statements?

I. All prisoners are uneducated.

II. Some men are prisoners.

Solution: Two possible diagrams are shown below for the given statements.

Conclusion I follow from both the possibilities, so the conclusion I am true.

Therefore, both conclusions are true. Example 4: Which of the two conclusions can be concluded on the basis of given statements?

I. All lengths are sides.

II. No breadth is aside.

Solution: Two possible diagrams are shown below for the given statements. 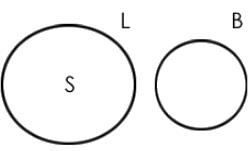 Therefore, only conclusion II is true. 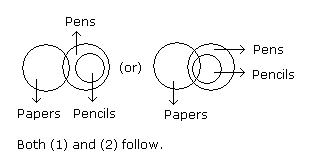