The root locus method was introduced by W.R Evans in 1948. Root locus is a graphical method in which the movement of poles in the s-plane can be located when a specific parameter is varied from 0 to infinity. The parameter assumed to be varied is generally the gain of the system.Consider the below closed loop system.

The equation of a closed loop system is given by:1 + G(s)H(s) = 0Where,G(s) is the gain of the transfer functionH(s) is the feedback gainIn the case of root locus, the gain K is also assumed as part of the closed-loop system. K is known as system gain or the gain in the forward path. The characteristic equation after including the forward gain can be represented as:1 + KG'(s)H(s) = 0Where,G(s) = KG'(s)When the system includes the variable parameter K, the roots of the closed loop system are now dependent on the values of 'K.'The value of 'K' variable can vary in two cases, as shown below:

In the first case, for every different value (integer or decimal) of K, we will get separate set of locations of the roots. If all such locations are joined, the resulting plot is defined as the root locus. We can also define root locus as the locus of the closed loop poles obtained when the system gain 'K' is varied from -infinity to infinity. When the K varies from zero to infinity, the plot is called the direct root locus. If the system gain 'K' varies from -infinity to zero, the plot thus obtained is known as inverse root locus. The gain K is generally assumed from zero to infinity unless specially stated.

Let's consider an example.Example: Obtain the root locus of the unity feedback system with G(s) = K/s. 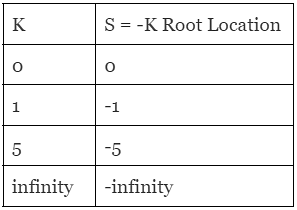 The plot of the root locus for the above values of K is shown below:

In addition in determining the stability of the system, root locus also helps to determine: