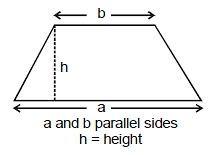 Mathematics is the language of physics. It becomes easier to describe, understand and apply the physical principles, if one has a good knowledge of mathematics.

(4) Trigonometric Properties (i) Measurement of angle & relationship between degrees & radian In navigation and astronomy, angles are measured in degrees, but in calculus it is best to use units called radians because of they simplify later calculations.Let ACB be a central angle in circle of radius r, as in figure.Then the angle ACB or q is defined in radius as -

The radian measure for a circle of unit radius of angle ABC is defined to be the length of the circular arc AB. since the circumference of the cirlce is 2π and one complete revolution of a circle is 360°, the relation between radians and degrees is given by the following equation.π radians = 180°

The trigonometric function of a general angle θ are defined in terns of x, y and r.Sine : sinθ = (opp/hyp) = (y/r)Cosecant : cosecθ = hyp/opp = r/y  Cosine: cosθ = adj/hyp = x/r Secant : secθ = hyp/adj = r/x    Tangent:  tan θ  = opp/adj = y/x  Cotangent: cot θ = adj/opp = x/yVALUES OF TRIGONOMETRIC FUNCTIONS If the circle in (Fig. above) has radius r = 1, the equations defining sinθ and cosθ become cosθ = x,  sinθ = yWe can then calculate the values of the cosine and sine directly from the coordinates of P.

Example 3. Find the six trigonometric ratios from given fig. (see above)

Values of sinθ, cosθ and tanθ for some standard angles.

A useful rule for remembering when the basic trigonometric functions are positive and negative is the CAST rule. If you are not very enthusiastic about CAST. You can remember it as ASTC (After school to college) 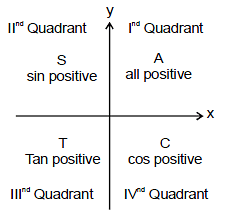 The CAST ruleRULES FOR FINDING TRIGONOMETRIC RATIO OF ANGLES GREATER THAN 90°.Step 1 → Identify the quadrant in which angle lies.Step 2 → (a) If angle = (nπ ± 6) where n is an integer. Then

where n is in integer. Then  trigonometric function of

complimentary trigonometric function of Θ and sign will be decided by CAST Rule.

6. small angle approximationIt is a useful simplification which is only approximately true for finite angles. It involves linearization of the trigonometric functions so that, when the angle q is measured in radians.sinθ

for the second order approximation tanθ

Small angle approximation. The value of the small angle X in radians is approximately equal to its tangent.

8. GraphsFollowing graphs and their corresponding equations are frequently used in Physics.(i) y = mx, represents a straight line passing through origin. Here, m = tanθ is also called the slope of line, where θ is the angle which the line makes with positive x-axis, when drawn in anticlockwise direction from the positive x-axis towards the line.

(c) x = c will be a line perpendicular to y axis