The document Battle Of Plassey 1757 Notes | EduRev is a part of the UPSC Course History for UPSC (Civil Services) Prelims.
All you need of UPSC at this link: UPSC

INTRODUCTIONBattle of Plassey was a major turning point in modern Indian history that led to the consolidation of the British rule in India. This battle was fought between the East India Company headed by Robert Clive and the Nawab of Bengal (Siraj-Ud-Daulah) and his French Troop. This battle is often termed as the ‘decisive event’ which became the source of ultimate rule of the British in India. The battle occurred during the late reign of Mughal empire (called later Mughal Period). Mughal emperor Alamgir-II was ruling the empire when the Battle of Plassey took place.BATTLE OF PLASSEYIt is a battle fought between the East India Company force headed by Robert Clive and Siraj-Ud-Daulah (Nawab of Bengal). The rampant misuse by EIC officials of trade privileges infuriated Siraj. The continuing misconduct by EIC against Siraj-Ud-Daulah led to the battle of Plassey in 1757.CAUSES OF THE BATTLE OF PLASSEY 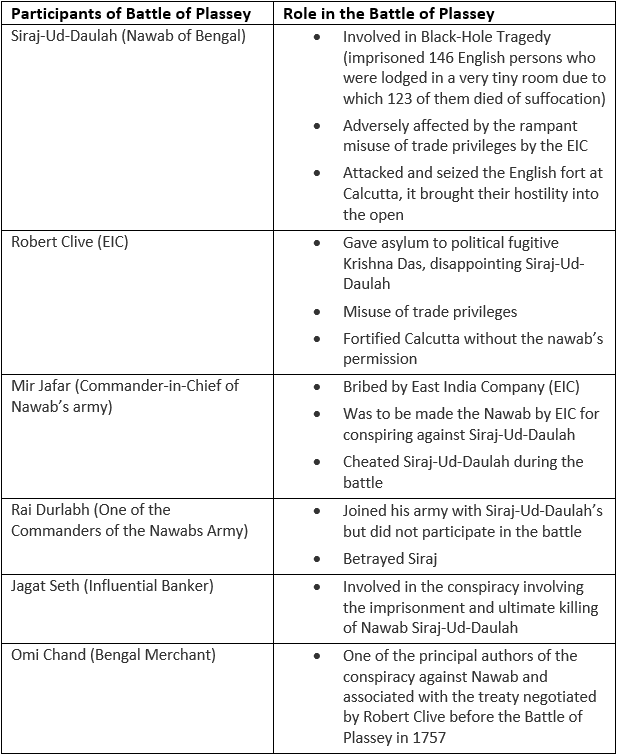 EFFECTS OF BATTLE OF PLASSEYApart from the British getting political power of Northern India but only after Nawabs, there were several other effects in many forms that came out as a result of the Battle of Plassey. They can be categorised as: