The Great Indian Bustard is a huge ground bird with a long neck and long bare legs. It is an inhabitant of the semi-arid areas of Rajasthan, Gujarat and Maharashtra. Hunting for its flesh has reduced its population to over 800. It is a highly endangered bird.

7. Valley of flower National park – It is situated at Chamoli- Garhwal (Uttaranchal)

Note :It mentioned the effect of DDT on birds. The population of Ladybird bettle declined.

10. The black buck is one of the most graceful antelopes native of India. The male possesses a pair of spirally twisted horns. Once abundant in several parts of India, its population had come down until the enforcement of the wild life (Protection) Act.

(1) Restriction and prohibition on hunting of animals.

(3) Setting up and managing Sanctuaries and National parks.

(5) Control of trade and commerce of wildlife.

3. Chipko Movement was born in March-1973 at Gopeshwar in Chamoli district. The movement had two leaders- Sundarlal Bahuguna of Silyara in Tehri and Chandi Prasad Bhatt of Gopeshwar.

Appiko Movement – Similar type movement, Appiko movement was under taken by Poundurang hegde in south in 1983.

SOME OTHER INFORMATION ABOUT BIODIVERSITY:

1. Sacred forest : These are forest patches protected by tribal communities due to religious sanctity in Karnataka, Maharashtra, Kerala, Meghalaya.

Sacred lake : Khecheopalri lake in Sikkim has been declared "Sacred lake" by people.

2. Mine Spoil : The land that has been destroyed due to mining is known as derelict land or mine spoil.

(i) Western Ghats and Sri Lanka

4. Biodiversity :- The term biodiversity refers to the totality of genes, species and ecosystem of a region.

5. Diversity at the level of community – Three types :

(i) Alpha diversity : Diversity within community.

(iii) Gamma diversity : Diversity of the habitats over the total landscape or geographical area.

6. Reason for loss of Biodiversity :

(i) Habitat loss and fragmentation.(ii) Disturbance and pollution.(iii) Introduction of exotic species – New species entering in a geographical region it is called exotic species or alien species. Such species may cause disappearance of native species through changed biotic interactions. Exotic species are having large impact especially in island ecosystem. e.g. of exotic species :

7. Type of Extinction of species :

Co-extinctions :When a species becomes extinct, the plant and animal species associated with it in an obligatory way also become extinct. e.g.Plant-pollinator.

9. Landscape : It is a unit of land with a natural boundary having a mosaic of patches. These patches generally represent different ecosystem.

Note : In ecological hierarchy landscape can be present between Ecosystem and Biomes.

10. India is divided into 10 Biogeographical regions.

(i) Preparation of wetland inventories. (ii) Checking waste disposal in wetland. (iii) Reduction of excessive inflow of nutrients and silt into wetlands.

(1) Protection from grazing. (2) Use of rotational grazing. (3) Removal of woody bushes or shrubs and weeds. (4) Conservation of soil and water of grasslands. (5) Use of controlled burning to promote recycling of nutrients.

Some other Information related to Grass land –

15. Conservation and management of water : Main approaches for conservation of water are :

16. Phenotypic Plasticity: The phenotype is the physical expression of the interaction between genotype of an organism and its environment.

The phenotypes show variations due to difference in the environmental conditions within the local habitat. Such type of variations are known as phenotypic plasticity.17. Ecocline – Transition form between two ecotypes called "Ecocline".

20. Botanochemicals – Plants can also be used for the manufacture of innumerable synthetic products called botanochemicals.

21. The key elements that lead to so much variation in the physical and chemical conditions of different habitats are temperature, water , light and soil.

22. Mango trees do not grow in temperate countries like Canada and Germany, snow leopards are not found in Kerala forests and tuna fish are rarely caught beyond tropical latitudes in the ocean due to unfavourable temperatures.

23. The salt concentration (measured as salinity in parts per thousand) is less than 5 percent in inlands water, 30-35 percent the sea and more then 100 percent in same hypersaline lagoons. Some organisms are tolerant of a wide range of salinites (euryhaline) but others are restricted to a narrow range (stenohaline).

24. Diapause : Under unfavourable conditions many zooplankton species in lakes and ponds are known to enter diapause a stage of suspended development.

25. Predators acting as conduits for energy transfer across tropic levels, predators play other important roles. They keep prey populations under control In the absence of predators, prey species could achieve very high population densities and cause ecosystem instability, When certain exotic species are introduced into a geographical area, they become invasive and start spreading fast because the invaded land does not have its natural predators, The prickly pear cactus introduced into Australia in the early 1920's caused havoc by spreading rapidly into millions of hectares of rangeland. Finally, the invasive cactus was brought under control only after a cactus feeding predator (a moth) from its natural habitat was introduced into the country.

Biological control methods adopted in agricultural pest control are based on the ability of the predator to regulate prey population. Predator also help in maintaining species diversity in community, by reducing the intensity of competition among competing prey species. In the rocky intertidal communities of the american Pacific Coast the starfish Pisaster is an important predator. In a field experiment, when all the starfish were removed from an enclosed intertidal area, more than 10 species of invertebrates became extinct within a year, because of interspecific competition.

If a predator is too efficient and overexploits its prey, then the prey might become extinct and following it, the predator will also become extinct for lack of food. This is reason why predators in nature are 'prudent'. Prey species have evolved various defenses to lessen the impact of predation. Some species of insects and frogs are cryptically-coloured (camouflaged) to avoid being detected easily by the predator. Some are poisonous and therefore avoided by the predators. The Monarch butterfly is highly distasteful to its predator (bird) because of special chemical present in its body. Interestingly, the butterfly acquires this chemical during its caterpillar stage by feeding on poisonous weed.

You must have seen the weed Calotropis growing in abandoned fields. The plant produces highly poisonous cardiac glycosides and that is why you never see any cattle or goats browsing on this plant. A wide variety of chemical substances that we extract from plants on a commercial scale (nicotine, caffeine, quinine, strychnine, opium, etc.,) are produced by them actually as defence against grazers and browsers.

2. Nektons – Those aquatic plants and animals which are capable of swimming actively are called nektons. They have well developed locomotory organs. It includes –

7. Cyclomorphosis – Change in body shape with the change in temperature e.g. Daphnia, Cladocera. 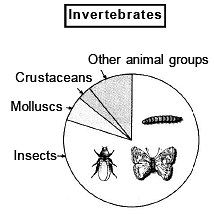 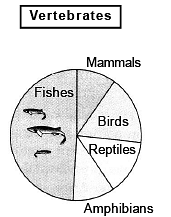 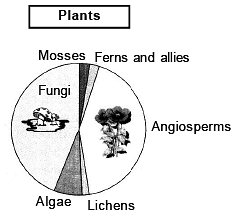 The document Biodiversity Conservation Notes | Study Biology Class 12 - NEET is a part of the NEET Course Biology Class 12.
All you need of NEET at this link: NEET
Join Course