The document Biotechnology: Principles and Processes 1 - From Past 28 Years Questions NEET Notes | EduRev is a part of the NEET Course Biology 28 Years NEET/AIPMT Question Papers of Class 12.
All you need of NEET at this link: NEET

Q.1. The sequence that controls the copy number of the linked DNA in the vector, is termed       [NEET 2020] (a) Palindromic sequence(b) Recognition site(c) Selectable marker(d) Ori site

Correct Answer is Option (D) Origin of replication (ori): This is a sequence from where replication starts and any piece of DNA when linked to this sequence can be made to replicate within the host cells. This sequence is also responsible for controlling the copy number of the linked DNA.

Q.2. Identify the wrong statement with regard to restriction enzymes.   (a) They are useful in genetic engineering.(b) Sticky ends can be joined by using DNA ligases.(c) Each restriction enzyme functions by inspecting the length of a DNA sequence.(d) They cut the strand of DNA at palindromic sites.     [NEET 2020] 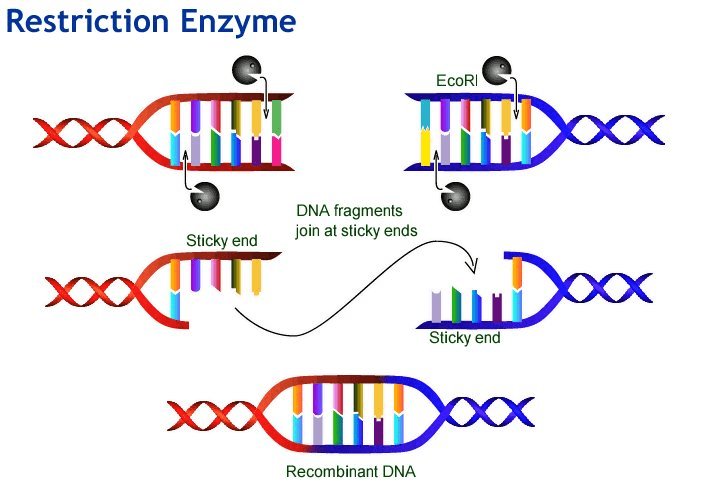 Select the correct option from the following

Correct Answer is Option (D) Solution.(a) Bacillus thuringiensis produces the cry proteins, which are Bt toxins and have insecticidal properties.(b) The highly thermostable DNA polymerase from Thermus aquaticus is ideal for both manual and automated DNA sequencing because it is fast & highly processive and remain active during the high temperature-induced denaturation of double stranded DNA.(c) The tumor-inducing (Ti) plasmid of Agrobacterium tumifaciens has been modified into a cloning vector. It is used to deliver required genes into plants.(d) Salmonella typhimurium is the first recombinant DNA that cut the piece of DNA from a plasmid carrying antibiotic resistance gene in the bacterium and linked it to the plasmid of E.coli.

Q.4. Choose the correct pair from the following      [NEET 2020] (a) Nucleases - Separate the two strands of DNA (b) Exonucleases - Make cuts at specified positions within DNA (c) Ligases - Join the two DNA molecules (d) Polymerases - Break the DNA into fragments

Correct Answer is Option (C) DNA ligase is an enzyme which can connect two strands of DNA together by forming a bond between the phosphate group of one strand and the deoxyribose group on another.Nucleases cleave the phosphodiester bonds of nucleic acids and maybe endo or exo, DNases or RNases, topoisomerases, recombinases, ribozymes, or RNA splicing enzymes.Exonucleases make cuts at the ends of the DNA strand. Polymerases help in the polymerization of a DNA or RNA molecule. DNA polymerases and RNA polymerases are the enzymes that perform this function.

Correct Answer is Option (D) The separated DNA fragments can be visualised only after staining the DNA with a compound known as ethidium bromide followed by exposure to UV radiation (you cannot see pure DNA fragments in the visible light and without staining). You can see bright orange coloured bands of DNA in a ethidium bromide-stained gel exposed to UV light.

Correct Answer is Option (C) The restriction endonuclease enzyme inspects the length of a DNA sequence. Once it recognises specific sequence, it binds to the DNA and cuts each of the two strands of the double helix at specific points in their sugar phosphate backbone. Special sequence in the DNA recognised by restriction endonuclease is called palindromic nucleotide sequence.

Q.8. DNA precipitation out of a mixture of biomolecules can be achieved by treatment with    [NEET 2019] (a) Chilled chloroform(b) Isopropanol(c) Chilled ethanol(d) Methanol at room temperature

Correct Answer is Option (C) Solution.In order to cut the DNA with restriction enzymes, it needs to be in pure form, free from other macromolecules. Since the DNA is enclosed by the membranes, we have to break the cell open to release DNA and other macromolecules like RNA, proteins, polysaccharides and lipids. It is obtained by treating the bacterial cells/plant or animal tissue with enzymes. Other molecules are removed by appropriate treatments and purified DNA ultimately precipitates out after the addition of chilled ethanol.

Q.9. Which one of the following equipment is essentially required for growing microbes on a large scale, for industrial production of enzymes?     [NEET 2019] (a) Bioreactor(b) BOD incubator(c) Sludge digester(d) Industrial oven

To produce enzyme in large quantity equipment required are bioreactors, that is large scale production involves use of bioreactors.

Q.10. A selectable marker is used to       [NEET 2019] (a) Help in eliminating the non-transformants, so that the transformants can be regenerated(b) Identify the gene for the desired trait in an alien organism(c) Select a suitable vector for transformation in a specific crop(d) Mark a gene on a chromosome for isolation using restriction enzyme

Q.11. Given below are four statements pertaining to the separation of DNA fragments using gel electrophoresis. Identify the incorrect statements.(i) DNA is a negatively charged molecule and so it is loaded on gel towards the anode terminal.(ii) DNA fragments travel along the surface of the gel whose concentration does not affect the movement of DNA.(iii) Smaller the size of the DNA fragment larger is the distance it travels through it.(iv) Pure DNA can be visualized directly by exposing UV radiation.Choose the correct answer from the options given below(a) (i), (iii) and (iv) (b) (i), (ii) and (iii) (c) (ii), (iii) and (iv) (d) (i), (ii) and (iv)

The only correct option out of the above is Smaller the size of the DNA fragment larger is the distance it travels through it.

Correct Answer is Option (D) A single PCR amplification cycle involves three basic steps, denaturation heating of target DNA to high temperature resulting in separation of two strands, annealing two oligonucleotide primers anneal or hybridise to each single template DNA and extension. Taq DNA polymerase synthesises DNA between primers and primers extend towards each other such that DNA stranded segment lying between the two is copied.

Q.13. The DNA fragments separated on an agarose gel can be visualised after staining with      [NEET 2017] (a) Acetocarmine(b) Aniline blue(c) Ethidium bromide(d) Bromophenol blue

Correct Answer is Option (C) The separated DNA fragments can be seen only after staining them with a compound known as ethidium bromide (EtBr) followed by exposure to UV radiation as bright orange coloured bands.

Q.14. DNA fragments are      [NEET 2017](a) Negatively charged(b) Neutral(c) Either positively or depending on their size(d) Positively charged

Correct Answer is Option (A) DNA fragments are negatively charged.

Correct Answer is Option (D) Some genes called “selectable markers” help in selecting those host cells which contain the vectors (transformants) and eliminating the non-transformants.

Correct Answer is Option (A)Electrophoresis is a technique used for the separation of substances of different ionic properties. Since the DNA fragments are negatively-charged molecules, they can be separated by allowing them to move towards the anode. DNA fragments move towards the anode according to their molecule size through the pores of agarose gel. Thus, the smaller fragments move farther away as compared to larger fragments.

After the formation of the product in the bioreactor it undergoes some processes before a finished product is ready for marketing. The process includes separation and purification of products which are collectively called downstream processing.

Q.18. Stirred-tank bioreactors have been designed for     [NEET 2016](a) Purification of product(b) Addition of preservatives to the product(c) Availability of oxygen throughout the process(d) Ensuring anaerobic conditions in the culture vessel

Correct Answer is Option (C)A stirred-tank reactor is usually cylindrical or with a curved base to facilitate the mixing of the reactor contents. The stirrer facilitates, even mixing and oxygen availability throughout the biorcactor.

Q.19. A foreign DNA and plasmid cut by the same restriction endonuclease can be joined to form a recombinant plasmid using       [NEET 2016](a) EcoRl(b) Taq polymerase(c) Polymerase III(d) Ligase

Correct Answer is Option (D)Ligase is a class of enzymes that catalyse the formation of covalent bonds using the energy released by the cleavage of ATP. Ligases arc important in the synthesis and repair of many biological molecules, including DNA ligase and used in genetic engineering to insert foreign DNA into cloning vectors.

Q.20. Which of the following is not a component of downstream processing?   [NEET 2016](a) Separation(b) Purification(c) Preservation(d) Expression

Correct Answer is Option (D)After the formation of the product in bioreactor, it undergoes some processes before a finished product to be ready for marketing. Downstream processing includes separation and purification process. The product obtained is subjected to quality' control, testing and kept in suitable preservatives.

Correct Answer is Option (B)EcoRV is a type II restriction endonuclease isolated from certain strains of E.coli. It creates blunt ends. It recognises the palindromic sequence of 6 bases. Sal I, Xho I and Hind lll restriction enzymes produce sticky ends.

Q.22. Which of the following is not a feature of the plasmids?    [NEET 2016](a) Transferable(b) Single-stranded(c) Independent replication(d) Circular structure

Correct Answer is Option (C)Hind II is the first restriction endonuclease. It was isolated from Haemophilus influenzae Rd. It always cut DNA at specific position producing blunt ends. DNase I is an endonuclease that cleaves DNA preferentially at phosphodiester linkages adjacent to a pyrimidine nucleotide. RNase is a type of nuclease that catalyses the degradation of RNA into smaller components. It can be endoribonuclease or exoribonuclease. A protease is an enzyme that perform proteolysis, i.e., protein catabolism by hydrolysis of the peptide bonds.

Q.25. Which of the following is not required for any of the techniques of DNA fingerprinting available at present?     [NEET 2016](a) Restriction enzymes(b) DNA-DNA hybridisation(c) Polymerase chain reaction(d) Zinc finger analysis

Correct Answer is Option (D)Any small, functional, freely folded domain in which coordination of one or more zinc ions is required to stabilise its structure is known as zinc finger. The z.inc finger domains are widely dispersed in eukaryotic genomes and are actively involved in sequence specific binding to DNA/RNA and contribute in protein-protein recognitions.

Q.26. Which of the following is not a feature of the plasmids?      [NEET 2016](a) Independent replication(b) Circular structure(c) Transferable(d) Single-stranded

Q.29. The cutting of DNA at specific locations became possible with the discovery of     [NEET 2015](a) Probes(b) Selectable markers(c) Ligases(d) Restriction enzymes

Q.30. The DNA molecule to which the gene of interest is integrated for cloning is called:    [NEET 2015](a) Vector(b) Template(c) Carrier(d) Transformer

Q.31. An analysis of chromosomal DNA using the Southern hybridization technique does not use:    [NEET 2014](a) Electrophoresis(b) Blotting(c) Autoradiography(d) PCR

Correct Answer is Option (D)PCR is a technique for enzymatically replicating DNA without using a living organism such as E. coli or Yeast. It is commonly used in medical and biological research labs for a variety of tasks like detection of hereditary diseases, identification of genetic fingerprints etc.

Q.32. In vitro clonal propagation in plants is characterized by:     [NEET 2014](a) PCR and RAPD(b) Northern blotting(c) Electrophoresis and HPLC(d) Microscopy

Correct Answer is Option (A) Now a days PCR and RAPD technique are used for the characterisation of in vitro clonal propagation in plants.

Correct Answer is Option (C) Plasmids are small extranuclear circular DNAs that carry extrachromosomal genes in bacteria and some fungi. They replicate independently. The best-known vectors which are also available commercially are pBR322 and pUC-18.