DefinitionA person who is related to another by birth rather than by marriage. 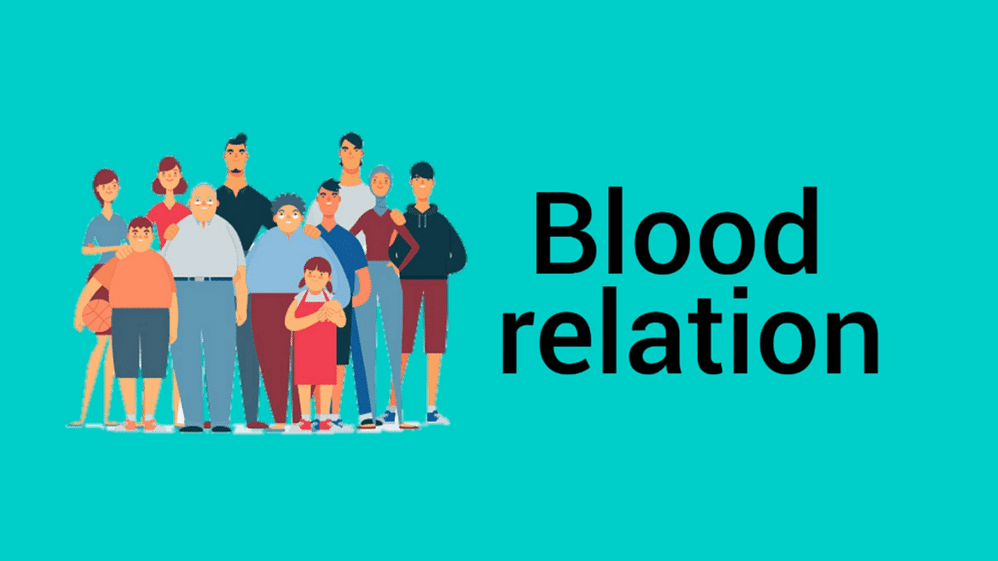 PrerequisitesTo remember easily the relations may be divided into two sides as given below:

Different Types of Questions with Explanation

A and C are both daughters of B. D being the brother of C  he is also a brother of A

C is the father of A, B and D.E is the mother of A, B and D.Therefore, E is the wife of C.Deductions:(i) A and D are brothers of D(ii) C is the father of A, B and D(iii) C is the mother of A, B and D(iv) E is wife of CQ.4. A is the sister of B. B is the brother of C. C is the son of D. How is D related to A?(a) Mother(b) Daughter(c) Son(d) UncleAns: aAs per the question, A is the sister of B and C whereas D is the father or mother of A, B and C. Therefore, D is the mother of B.Q.5. B is the brother of A. whose only sister is mother of C. D is maternal grandmother of C. How is A related to D?(a) Daughter-in-law(b) Daughter(c) Aunt(d) NephewAns: bAlthough sex of A is not mentioned clearly in the question. On the basis of information given is A is daughter of B.Q.6. A and B are sisters. R and S are brothers. A’s daughter is R’s sister. What is B’s relation to S?(a) Mother(b) Grandmother(c) Sister(d) AuntAns: dA and B are sisters.A's daughter is R's sister hence she is S's sister also.Then A has three children one daughter and two sons (R and S).Hence, B is the aunt of S.Q.7. E is the sister of B. A is the father of C. B is the son of C. How is A related to E?(a) Grandfather(b) Grand-daughter(c) Father(d) Great-grandfatherAns: aA is father of C, who is father of B that means A is Grandfather of B E is B’s sister, so A is also Grand father of E.Q.8. Given that:A is the mother of B.C is the son of A.D is the brother of E.E is the daughter of B.Who is grandmother of D?(a) A(b) B(c) C(d) DAns: aE is the daughter of B and D is brother of E. Therefore, D is son of B and A is mother of B. Thus, A is grandmother of D.Q.9. A is D’ brother. D is B’s father. B and C are sisters. How is A related to C?(a) Son(b) Grandson(c) Father(d) UncleAns: dB and C daughters of D .A is brother of D .Therefore A is uncle of C.Q.10. A is B’s sister. C is B’s mother. D is C’s father. E is D’s mother, then how A is related to D?(a) Grandfather(b) Daughter(c) Grandmother(d) GranddaughterAns: d

From the information given, it can be concluded:A is B's sister and their mother is C.D is their grandfather and E is their great-grandmother.So, A is the granddaughter of A.