Boundary Scan is a family of test methodologies aiming at resolving many test problems: from chip level to system level, from logic cores to interconnects between cores, and from digital circuits to analog or mixed-mode circuits. It is now widely accepted in industry and has been considered as an industry standard in most large IC system designs. Boundary-scan, as defined by the IEEE Std. 1149.1 standard [1-3], is an integrated method for testing interconnects on printed circuit board that is implemented at the IC level. Earlier, most Printed Circuit Board (PCB) testing was done using bed-of-nail in-circuit test equipment. Recent advances with VLSI technology now enable microprocessors and Application Specific Integrated Circuits (ASICs) to be packaged into fine pitch, high count packages. The miniaturization of device packaging, the development of surface-mounted packaging, double-sided and multi-layer board to accommodate the extra interconnects between the increased density of devices on the board reduces the physical accessibility of test points for traditional bed-of-nails in-circuit tester and poses a great challenge to test manufacturing defects in future.

The long-term solution to this reduction in physical probe access was to consider building the access inside the device i.e. a boundary scan register. In 1985, a group of European companies formed Joint European Test Action Group (JETAG) and by 1988 the Joint Test Action Group (JTAG) was formed by several companies to tackle these challenges. The JTAG has developed a specification for boundary-scan testing that was standardized in 1990 by IEEE as the IEEE Std. 1149.1-1990. In 1993 a new revision to the IEEE Std. 1149.1 standard was introduced (1149.1a) and it contained many clarifications, corrections, and enhancements. In 1994, a supplement that contains a description of the boundary-scan Description Language (BSDL) was added to the standard. Since that time, this standard has been adopted by major electronics companies all over the world. Applications are found in high volume, high-end consumer products, telecommunication products, defense systems, computers, peripherals, and avionics. Now, due to its economic advantages, smaller companies that cannot afford expensive in-circuit testers are using boundary-scan. Figure 41.1 gives an overview of the boundary scan family, now known as the IEEE 1149.x standards.

The Std. 1149.1, usually referred to as the digital boundary scan, is the one that has been used widely. It can be divided into two parts: 1149.1a, or the digital Boundary Scan Standard, and 1149.1b, or the Boundary Scan Description Language (BSDL) [1,6]. Std. 1149.1 defines the chip level test architecture for digital circuits, and Std. 1149.1b is a hardware description language used to describe boundary scan architecture. The 1149.2 defines the extended digital series interface in the chip level. It has merged with 1149.1 group. The 1149.3 defines the direct access interface in contrast to 1149.2. Unfortunately this work has been discontinued. 1149.4 IEEE Standard deals with Mixed-Signal Test Bus [4]. This standard extends the test structure defined in IEEE Std. 1149.1 to allow testing and measurement of mixed-signal circuits. The standard describes the architecture and the means of control and access to analog and digital test data. The Std.1149.5 defines the bus protocol at the module level. By combining this level and Std.1149.1a one can easily carry out the testing of a PC board.

1149.6 IEEE Standard for Boundary-Scan Testing of Advanced Digital Networks is released in 2002. This standard augments 1149.1 for the testing of conventional digital networks and 1149.4 for analog networks. The 1149.6 standard defines boundary-scan structures and methods required to test advanced digital networks that are not fully covered by IEEE Std. 1149.1, such as networks that are AC-coupled, differential, or both.

This extension of 1149.1 standardizes programming access and methodology for programmable integrated circuit devices. Devices such as CPLDs and FPGAs, regardless of vendor, that implement this standard may be configured (written), read back, erased and verified, singly or concurrently, with a standardized set of resources based upon the algorithm description contained in the 1532 BSDL file. JTAG Technologies programming tools contain support for 1532-compliant devices and automatically generate the applications. Clearly the testing of mixed-mode circuits at the various levels of integration will be a critical test issue for the system-on-chip design. Therefore there is a demand to combine all the boundary scan standards into an integrated one.

The boundary-scan test architecture provides a means to test interconnects between integrated circuits on a board without using physical test probes. It adds a boundary-scan cell that includes a multiplexer and latches, to each pin on the device. Figure 41.2 [1] illustrates the main elements of a universal boundary-scan device.

The Figure 41.2 shows the following elements: 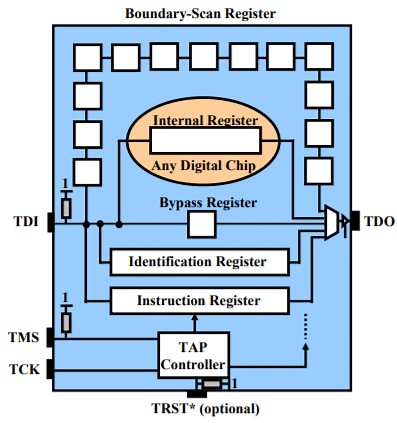 The test access ports (TAP), which define the bus protocol of boundary scan, are the additional I/O pins needed for each chip employing Std.1149.1a. The TAP controller is a 16-state final state machine that controls each step of the operations of boundary scan. Each instruction to be carried out by the boundary scan architecture is stored in the Instruction Register. The various control signals associated with the instruction are then provided by a decoder. Several Test Data Registers are used to stored test data or some system related information such as the chip ID, company name, etc.

The Test Access Ports (TAPs) are genral purpose ports and provide access to the test function of the IC between the application circuit and the chip’s I/O pads. It includes four mandatory pins TCK, TDI, TDO and TMS and one optional pin TRST* as described below. All TAP inputs and outputs shall be dedicated connections to the component (i.e., the pins used shall not be used for any other purpose). 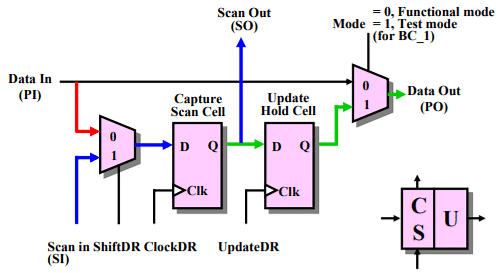 Figure 41.3 [1] shows a basic universal boundary-scan cell, known as a BC_1. The cell has four modes of operation: normal, update, capture, and serial shift. The memory elements are two Dtype flip-flops with front-end and back-end multiplexing of data. It is important to note that the circuit shown in Figure 41.3 is only an example of how the requirement defined in the Standard could be realized. The IEEE 1149.1 Standard does not mandate the design of the circuit, only its functional specification. The four modes of operation are as follows:

The Test ClocK, TCK, is fed in via yet another dedicated device input pin and the various modes of operation are controlled by a dedicated Test Mode Select (TMS) serial control signal. Note that both capture and shift operations do not interfere with the normal passing of data from the parallel-in terminal to the parallel-out terminal. This allows on the fly capture of operational values and the shifting out of these values for inspection without interference. This application of the boundary-scan register has tremendous potential for real-time monitoring of the operational status of a system — a sort of electronic camera taking snapshots — and is one reason why TCK is kept separate from any system clocks.

At the device level, the boundary-scan elements contribute nothing to the functionality of the internal logic. In fact, the boundary-scan path is independent of the function of the device. The value of the scan path is at the board level as shown in Figure 41.4 [1]. The figure shows a board containing four boundary-scan devices. It is seen that there is an edgeconnector input called TDI connected to the TDI of the first device. TDO from the first device is permanently connected to TDI of the second device, and so on, creating a global serial scan path terminating at the edge connector output called TDO. TCK is connected in parallel to each device TCK input. TMS is connected in parallel to each device TMS input. All cell boundary data registers are serially loaded and read from this single chain. 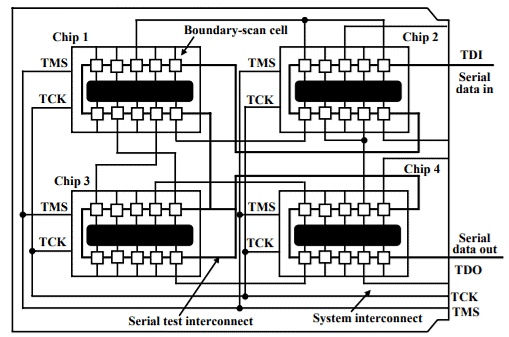 The advantage of this configuration is that only two pins on the PCB/MCM are needed for boundary scan data register support. The disadvantage is very long shifting sequences to deliver test patterns to each component, and to shift out test responses. This leads to expensive time on the external tester. As shown in Figure 41.5 [1], the single scan chain is broken into two parallel boundary scan chains, which share a common test clock (TCK). The extra pin overhead is one more pin. As there are two boundary scan chains, so the test patterns are half as long and test time is roughly halved. Here both chains share common TDI and TDO pins, so when the top two chips are being shifted, the bottom two chips must be disabled so that they do not drive their TDO lines. The opposite must hold true when the bottom two chips are being tested. 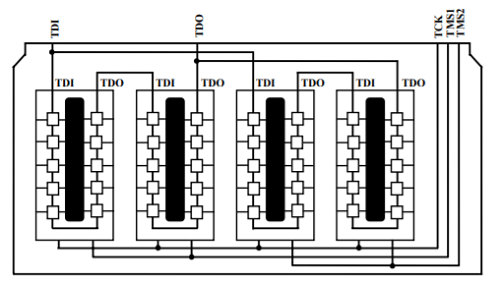 The operation of the test interface is controlled by the Test Access Port (TAP) controller. This is a 16-state finite state-machine whose state transitions are controller by the TMS signal; the statetransition diagram is shown in Figure 41.7. The TAP controller can change state only at the rising edge of TCK and the next state is determined by the logic level of TMS. In other words, the state transition in Figure 41.6 follows the edge with label 1 when the TMS line is set to 1, otherwise the edge with label 0 is followed. The output signals of the TAP controller corresponding to a subset of the labels associated with the various states. As shown in Figure 41.2, the TAP consists of four mandatory terminals plus one optional terminal. The main functions of the TAP controller are: 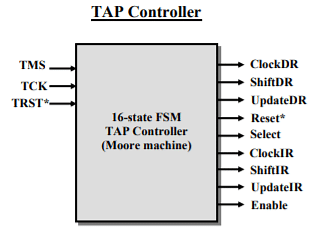 Figure 41.6 shows a top-level view of TAP Controller. TMS and TCK (and the optional TRST*) go to a 16-state finite-state machine controller, which produces the various control signals. These signals include dedicated signals to the Instruction register (ClockIR, ShiftIR, UpdateIR) and generic signals to all data registers (ClockDR, ShiftDR, UpdateDR). The data register that actually responds is the one enabled by the conditional control signals generated at the parallel outputs of the Instruction register, according to the particular instruction.

The other signals, Reset, Select and Enable are distributed as follows: 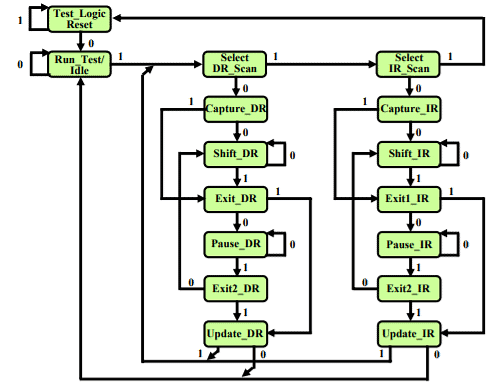 Figure 41.7 shows the 16-state state table for the TAP controller. The value on the state transition arcs is the value of TMS. A state transition occurs on the positive edge of TCK and the controller output values change on the negative edge of TCK. The 16 states can be divided into three parts. The first part contains the reset and idle states, the second and third parts control the operations of the data and instruction registers, respectively. Since the only difference between the second and the third parts are on the registers they deal with, in the following only the states in the first and second parts are described. Similar description on the second part can be applied to the third part.