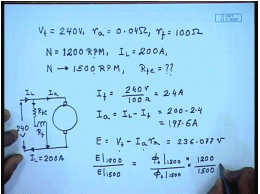 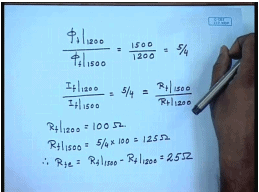 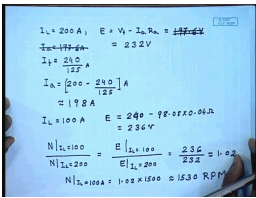 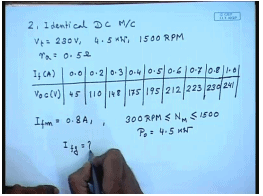 Let us say we have a ward Leonard system of speed control with the following rating there are 2 identical d c machines both are the following rating V t equal to 230 volts the power rating is 4 point 5 kilowatt rated speed is 1500 RPM the armature resistance of both machines are zero point 5 ohm the magnetization characteristics of the machines at 1500 RPM are as follows at no field current. There is a residual voltage of 45 volts 0.2 ampere that is 110 volts 0.3amperes hundred forty eight volts 0.4 amperes 175 volts zero point 5 amperes 1 ninety 5 volts 0.6 amperes 212 volts 0.723 volts 0.8230 volts and 1.0241 volts.Now, the I f m is set at 0.8 amperes the motor speed has to be changed between 300 RPM N motor and 1500 RPM, where the whole range the output power of the motor will be 4 point 5 kilowatt. So, what should be the range of generator field current. So, from this data when I f m equal to 0.8 ampere.(Refer Slide Time: 17:10) The induced voltage induced E of the motor is from the o c c data, which is 2 thirty volts and. So, for motor speed N m equal to 300 RPM this is at N m equal to 1500 RPM or at N m equal to 300 RPM E m at 300 RPM will be 300 by 1500 into 2 thirty equal to forty 6 volts. The power output p m at 300 RPM equal to forty 5 hundred watts. So, this is equal to E m at 300 RPM multiplied by I a at 300 R p m. So, I a at 300 RPM is forty 5 zero zero by forty 6, which is equal to 97.8 amperes. So, what is the generator voltage E g equal to E of motor plus drop across both the armature resistance of the motor and the generator. So, 2 times R a I a this comes to forty 6 plus 2 into 0.5 into 97.8 this gives about 143.8 volts.Now, from the magnetization data we see that at point 2 ampere of field current the generated voltage is hundred ten volt and at point 3 it is hundred forty eight volts. So, in order to generate a voltage of 1 forty there point eight volts somewhere close to zero point 3 ampere of field current will be required and this can be found by interpolation. So, the field current required I f g will be equal to it will be less than zero point 3 ampere minus 0.1 divided by 148 minus hundred ten 0.1 is the difference between this field current and this field current into 1 forty eight minus 143.8 this is equal to 0.29 amperes.(Refer Slide Time: 21:24) 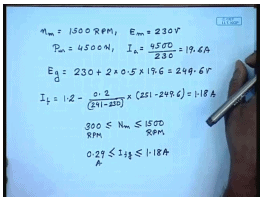 Similarly, for N m equal to 1500 RPM E m in that case we know equal to 2 thirty volts. So, p m equal to 4500 watts. So, I a equal to 4500 by 230 equal to 19.6 amperes. So, E generator equal to 230 plus 2 into resistance of the armature which is zero point 5 ohm into nineteen point 6 this is equal to 240 9.6 volts now again from the magnetization characteristics we find I f the missing data which says are 1 point 2 ampere this is 251 volts. So, point minus 0.2 divided by assuming linear this equal to hence for 300 I f g will vary in the range is 0.29 to 1.18 ampere. So, this is how we can calculate the field current required from the generator of a ward leonard system for controlling the speed of the motor over a given range. So, far we have concerned our self with starting and speed control of a d c shunt motor; however, the stopping of the motor is also equally important. So, let us see a few cases where this stopping becomes controlled stopping becomes very important.(Refer Slide Time: 25:35) 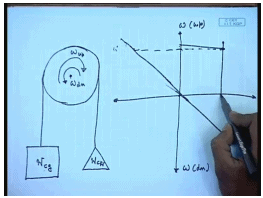 Let us go back to the situation of the lift or elevator drive, where as we have mentioned that is this elevator cage the weight of w c g and then there is a counter weight of w c c c w in order to lift the cage the this is omega for upward motion and this is omega for downward motion. So, the motor shaft needs to rotate in 2 different directions now let us see what happens under different operative scenario this is for upward motion this is for downward motion suppose the cage is full. So, that w c g is larger than w c and we want to lift the cage in that case we have seen that the torque speed characteristics of these machine this system is given by a vertical straight line and if it is driven by a separately excited d c machine then somewhere here the operating speed will be.However, as the destination approaches it is necessary to stop the machine, but there was already some speed of the motor and speed of the system. So, the stored current energy has to be dissipated. So, it is necessary to apply certain braking torque. So, that the motor speed comes to stand still that is for some time the motor should be allowed to decelerate this is achieved by what is called dynamic braking in which case the terminal voltage of the motor is made 0, and the additional resistance is inserted hence the motor characteristics becomes somewhat like this and when you go to that then the operating characteristics shifts to here.(Refer Slide Time: 29:24) 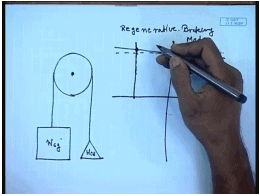 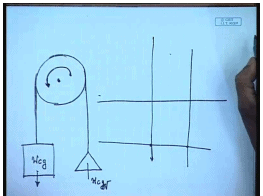 A third situation will arise, suppose we are trying to lower a full cage the direction of rotation will now be this; however, it is necessary to lower the cage since w c g is now larger than w c w the load torque is in this quadrant; however, now the motor rotates in the reverse direction and it is necessary now to it is now necessary to control the speed in which case what we do we reverse the terminal supply and make the motor operate in this fashion. So, this becomes the supply voltage.(Refer Slide Time: 34:45) 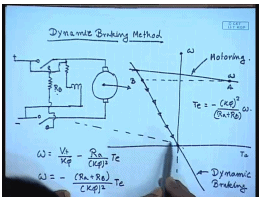 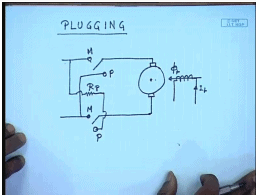 There is a third method of braking called plugging in this case what we do it is somewhat like dynamic braking, but this is the position of the switch for motor mode operation this is the position of the switch for plugging mode operation. So, what we in essence are doing is in order to apply plugging you disconnect the machine from the normal supply and reverse the polarity of the supply voltage this of course, essential that a additional resistance is inserted into the motor terminal. So, what will be the characteristics.(Refer Slide Time: 44:15) 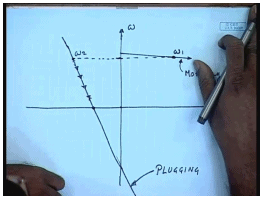 So, this was the nominal torque speed characteristics of the motor, and suppose it was operating at this speed of omega 1 when we apply plugging the polarity omega equal to V t by k phi minus R a by k phi square t E or plugging the polarity of V t is made negative as well as R a increases to R a plus R p.So, for plugging the characteristics becomes somewhat like this and as soon as plugging is applied the operating point shifts to omega 2 and then follows the this is the motoring mode and this is the plugging and then follows the characteristics during plugging to come to zero speed; however, it is to be understood that if we apply plugging then the motor can be can have a larger braking torque, but it does not stop at zero speed rather it tends to start rotating in the reverse direction therefore, before the motor come to a standstill it must be disconnected from the supply otherwise the motor may start rotating in the reverse direction.(Refer Slide Time: 47:37) 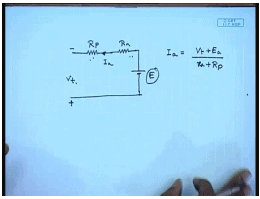 Another thing to note is that during plugging the polarity of the as long as the speed remains positive the equivalent circuit of the motor becomes somewhat like this. This is the plugging resistance this is the armature resistance and this is the induced back E m f the polarity of the supplied voltage as now reversed this becomes plus this becomes minus V t E the current I a now flows out of the machine I a equal to V t plus E a divided by R a plus R p. So, not only does the power supplied by the internal back E m f E p, but as well as the power additional power is taken from the source which is also dissipated in the armature and the plugging resistance. So, this method of stopping the motor is very inefficient, and is not used except for very small motors, let us try to get an idea of the kind of power loss that is involved by solving a small problem.(Refer Slide Time: 49:40) 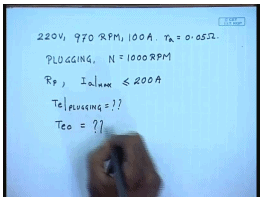 For that let us assume that we have a d c shunt motor rating is 2 twenty volts nine seventy RPM thousand hundred amperes the armature resistance R a equal to 0.05 ohm suppose we want to break it by using plugging from a initial RPM of thousand R p m. So, find out what should be R p. So, that I a maximum is less than 2 times the rated armature current once, it is less than 200 amperes then what is the braking torque and what is the torque at 0 speed.(Refer Slide Time: 51:30) 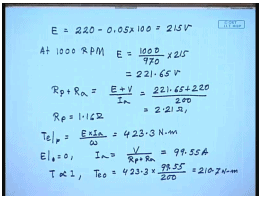 Now, at nine seventy RPM we know at rated current E equal to 2 twenty minus zero point zero 5 into hundred equal to 215 volts. So, at thousand RPM E equal to thousand by nine seventy into 215 equal to 2 twenty 1 point 6 5 volts. So, if I want to restrict the current to 200 ampere then R p plus R a equal to E plus V divided by I a this is equal to 221.65 plus 220 by 200 this is equal to 2.21 ohm hence R p will be 1 point 1 6 ohm.The braking torque t t E plugging equal to E into I a by omega this comes to 4 twenty 3 point 3 newton meter. So, very large torque at 0 speed E equal to zero. So, I a equal to V divided by R p plus R a this comes to 99.55 amperes and since t is proportional to I a t E that is zero will be equal to 423.3 into ninety nine point 5 five by 200 this comes to 200 ten point seven newton meter. So, we see even at start there is a very large torque and there will be a tendency of the motor to start rotating in the reverse direction hence the motor must be disconnected before the speed comes to zero.Thank you.