Q6. Give the meaning and characteristics of production possibility frontier.
Ans. It is the locus of points representing such combinations of two goods that can be produced by fuller utilization of given resources.
Characteristics:
1. It slopes downward from left to right.
2. It is concave to the origin.

Q8. Distinguish between ‘increase in demand’ and ‘increase in quantity demanded’ of a good.
OR
Explain the meaning of ‘Budget set’ and ‘Budget line’.
Ans. When demand of a good rises due to a fall in its price, it is called ‘increase in quantity demanded’ and when demand of a good rises at the same price of the good, it is called ‘increase in demand.’
OR
Budget set refers to the set of possible combinations of two goods which the consumer can afford with his income at given prices. From the budget set if only such bundles are taken on which total expenditure equals total income and plotted on a graph, we get a line called the budget line. 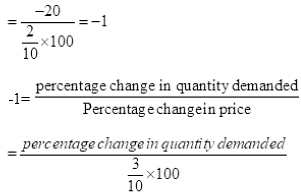 Q14. From the following total cost and total revenue schedule of a firm, find out the level of output, using marginal cost and marginal revenue approach, at which the firm would be in equilibrium. Give reasons for your answer.

The conditions for producer’s equilibrium are:
I. MC = MR and
II. Beyond the level of output at which MC = MR, MC must be greater than MR.
Both these conditions are satisfied at 4 units of output. So the producer is in equilibrium,
when he produces 4 units.

Q15. Distinguish between perfect oligopoly and imperfect oligopoly. Also explain the ‘‘interdependence between the firms’’ feature of oligopoly.
OR
Explain the meaning of excess demand and excess supply with the help of a schedule.
Explain their effect on equilibrium price.
Ans. In oligopoly market, if the product is homogeneous then it is called Perfect oligopoly. When the product is hetro geneous then it is called imperfect oligopoly.
Under oligopoly, firms are interdependent. There are only a few firms in such a market. If some firm changes its decision regarding its output or price, it will affect other firms. They react, so the firm while taking decision about price and output keeps in mind the reaction of other firms.
OR
Market demand and market supply schedule

At price of Rs 6 the quantity demanded and supplied are equal, so it is the equilibrium price. When the market price is less than the equilibrium price, quantity demanded will be more than quantity supplied as shown in the schedule. This is the situation of “excess demand”. At a price of Rs 5 there is excess demand. This leads to competition among buyers resulting in price rise. When price rises demand falls and supply rises. These changes continue till demand and supply are equal. Similarly at a price of Rs 7, there is “excess supply”. This will result in competition among sellers. This will reduce price. When price falls demand will rise and supply will fall
ultimately equilibrium is reached when price falls to Rs 6.

Q17. Define marginal propensity to consume.
Ans. It is the ratio of change in consumption expenditure to change in income.

Q19. Define Government budget.
Ans. It is a financial statement showing expected receipts and expected expenditure of the government during a fiscal year.

Q26. Explain how government budget can be helpful in bringing economic stabilization in the economy.
Ans. Economic stability means stability of prices. Too much fluctuation in prices is not good for the economy. Government uses taxation policy and expenditure policy in controlling the prices. For example in an inflationary situation, government can reduce its expenditure and this would reduce aggregate demand. During deflationary situation, government can reduce taxes and increase its expenditure.

Q27. Distinguish (a) between current account and capital account, and (b) between autonomous transactions and accommodating transactions of balance of
payments account.
Ans. (a) Current account records exports and imports of goods and services and transfer payments whereas capital account records borrowings and lending to and from abroad, investments to and from abroad and changes in foreign exchange reserves.

Q28. Explain the precautions that should be taken while estimating national income by expenditure method.
OR
Will the following be included in the domestic product of India? Give reasons for your answer.

(a) Profits earned by foreign companies in India
(b) Salaries of Indians working in the Russian Embassy in India
(c) Profits earned by a branch of State Bank of India in Japan
Ans.
Precautions to be taken while estimating N.I. by expenditure method.
I. Expenditure on intermediate goods should not be included otherwise it will result in double counting.
II. Transfer payments such as gifts, old age pension etc, should not be included. These payments are not made for factor services.
III. Expenditure on financial assets like shares etc. should not be included. This does not result in any production. It is only transfer of money.
OR
(a) Yes, as it is a factor income earned within domestic territory of India.
(b) No, because Russian Embassy is not a part of the domestic territory of India. It is factor income from abroad.
(c) No, as profits are not earned within the domestic territory of India.

Q30. Given a consumption curve, outline the steps required to be taken in deriving a saving curve from it. Use diagram.
Ans. 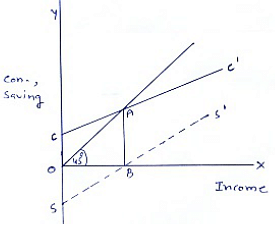 CC’ is the given consumption curve steps taken in deriving saving curve from it.
Take OS = OC
Draw a 45° Line on OX at O.
It intersects CC’ at point A.
Draw a perpendicular for A at OY meeting OY at B.
Join SB and extend it to S’
SS’ is the required saving curve.