Q2. Ceteris Paribus, if the government provides subsidies on electricity bills, what would be the likely change in the market demand of desert coolers?
Ans. Demand for desert coolers will increase.

Q5. State any two central problems under ‘problem of allocation of resources’.
Ans. a) What to produce and in what quantity?
b) How to produce?
c) For Whom to produce? (Any Two)

Q7. Explain ‘black marketing’ as a direct consequence of price ceiling.
OR
Explain the concept of ‘buffer stock’ as a tool of price floor.
Ans. Black marketing may be termed as a direct consequence of price-ceiling, as it implies a situation whereby the commodity under the government’s control policy is illegally sold at a higher price than the one fixed by the government, it may primarily arise due to the presence of consumers who may be willing to pay higher price for the commodity than to go without it.

Q9. Comment upon the degree of elasticity of demand for Good X, in the following given situations, if the price of the commodity rises from Rs. 5 per unit to Rs. 7 per unit and
the quantity demanded falls from 20 units to 16 units :
i) Using the total household expenditure method,
ii) Using proportionate method.
Ans.
i) P X Q = TE
5 X 20 =  100
7 X 16= 112
Since the price & total expenditure carry positive relation Ed<1, relatively inelastic demand.
ii)

Q10. ‘Higher indifference curve represents higher level of satisfaction to the consumer’. Explain the statement, also state the underlying assumption related to this property of
indifference curve.
OR 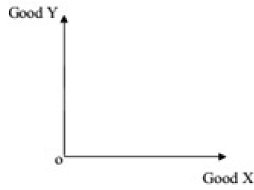 The underlying assumption here is the assumption of monotonic preference which represents that a consumer will prefer a combination which contains more of at least one
and no less of the other.
Or
If MUx/Px>MUy/Py, then it means that satisfaction of the consumer derives from spending a rupee on Good X greater than the satisfaction derived from spending a rupee on
Good Y. The consumer will reallocate his income by substituting Good X for Good Y. As the consumption of Good X increases the marginal utility derived from it goes on diminishing and reverse proposition occurs for Good Y, this process will continue till MUx/Px becomes equal to MUy/Py.

Q11. Define Marginal Opportunity Cost. Explain the concept with a hypothetical numerical example.
Ans. Marginal Opportunity Cost (MOC) of a given commodity along a PPC is defined as the amount of sacrifice of a commodity so as to gain one additional unit of the other
commodity. MOC can also be termed as Marginal Rate of Transformation i.e. the ratio of number of units of a Good sacrificed to produce an additional unit of the other Good.
Schedule.

Q12. a) What is meant by price rigidity, under oligopoly.
b) Elaborate the implication of the conditions of equilibrium of a firm.
Ans. (a). Price rigidity is the price of the product fixed after deliberations and negotiations by the oligopolistic firms, to which they generally stick with a view to avoid any
sort of price war.
(b). Firm’s equilibrium is that level of output where its profits are maximized Conditions of Firm’s Equilibrium:
i) Marginal Revenue must be equal to Marginal Cost.
ii) Marginal Cost must be rising.
The conditions implies that the slope of rising Marginal Cost Curve is equal to the slope of Marginal Revenue curve. 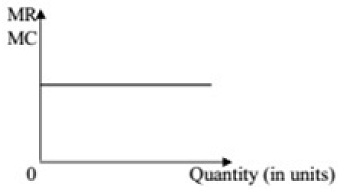 Implication of the conditions lies in the fact that beyond the equilibrium point MC would become greater than MR, i.e. for each additional unit sold beyond output OQ the cost of
producing that unit will be more than the revenue generated by the unit.

Q13. a) Distinguish between stock and supply.
b) Complete the following schedule: 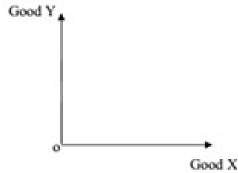 Q25. What is meant by ‘official reserve transactions’? Discuss their importance in
Balance of Payments.
Ans. Transactions by a central bank that cause changes in its official reserves. These are usually purchases or sales of its own currency in the exchange market in exchange for foreign currencies or other foreign-currency- denominated assets. They may be Autonomous Receipts and Autonomous Payments, disequilibrium between which may occur as deficit/surplus in balance of payment.

Q27. “Governments across nations are too much worried about the term fiscal deficit”. Do you think that fiscal deficit is necessarily inflationary in nature? Support your answer with valid reasons.
Ans. The term fiscal deficit is the difference between the government's total expenditure and its total receipts (excluding borrowing). Such borrowings are generally financed by issuing new currency which may lead to inflation, however, if the borrowings are for the infrastructural developmental purposes this may lead to capacity building and may not be inflationary.