The complementry CMOS inverter is realized by the series connection of a p- and n-device as in fig 15.11.

Noise margin is a parameter closely related to the input-output voltage characteristics. This parameter allows us to determine the allowable noise voltage on the input of a gate so that the output will not be affected. The specification most commonlyused to specify noise margin (or noise immunity) is in terms of two parameters- The LOW noise margin, NML, and the HIGH noised margin, NMH. With reference to Fig 4. NML is defined as the difference in magnitude between the maximum LOW outputvoltage of the driving gate and the maximum input LOW voltage recognized by the driven gate. Thus,

The value of NMH is difference in magnitude between the minimum HIHG output voltage of the driving gate and the minimum input HIGH voltage recognized by the receiving gate. Thus,

The operation of CMOS inverter can be divided into five regions .The behavior of n- and p-devices in each of region may be found using

We will describe about each regions in details-

Region A : This region is defined by 0 =< Vin < Vtn in which the n-device is cut off (Idsn =0), and the p-device is in the linear region. Since Idsn = –IIdsp, the drain-to-source current Idsp for the p-device is also zero. But for Vdsp = Vout– VDD, with Vdsp = 0, the output voltage is Vout=VDD.

Region B : This region is characterized by Vtn =< Vin < VDD /2 in which the p-device is in its nonsaturated region (Vds != 0) while the n-device is in saturation. The equivalent circuit for the inverter in this region can be represented by a resistor for the p-transistor and a current source for the n-transistor as shown in fig. 6 . The saturation current Idsn for the n-device is obtained by setting Vgs = Vin . This results in

Fig 15.31: Equivalent circuit of MOSFET in region B

Region C: In this region both the n- and p-devices are in saturation. This is represented by fig 7 which shows two current

Which implies that region C exists only for one value of Vin. We have assumed that a MOS device in saturation behaves like an ideal current soured with drain-to-source current being independent of Vds.In reality, as Vds increases, Ids also increases slightly; thus region C has a finite slope. The significant factor to be noted is that in region C, we have two current sources in series, which is an “unstable” condition.

expression of Vth is particularly useful since it provides the basis for defining the gate threshold Vinv which corresponds to the state where Vout=Vin .This region also defines the “gain” of the CMOS inverter when used as a small signal amplifier.

Region D: This region is described by VDD/2 <Vin =< VDD+ Vtp.The p-device is in saturation while the n-device is operation in its nonsaturated region. This condition is represented by the equivalent circuit shown in fig 15.33 .The two currents may be written as

Region E: This region is defined by the input condition Vin >= VDD -Vtp, in which the pdevice is cut off (Idsp =0), and the n-device is in the linear mode. Here, Vgsp= Vin - VDD Which is more positive than Vtp. The output in this region is Vout=0

From the transfer curve , it may be seen that the transition between the two states is very step.This characteristic is very desirable because the noise immunity is maximized. 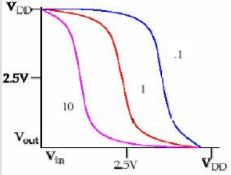 The gate-threshold voltage, Vinv, where Vin =Vout is dependent onβn/βp . Thus, for given process, if we want to change βn/βp we need to change the channel dimensions, i.e.,channel-length L and channel-width W. Therefore it can be seen that as the ratio βn/βp is decreased, the transition region shifts from left to right; however, the output voltage transition remains sharp.