numbers, however small but not zero, there exists a corresponding number ε greater than zero such that

For all values of x for which 0

If x approaches a from larger values of x than a, then

If x approaches a from smaller values of x than a, then

If a function f (x) takes the form

Example 2: Find the value of

is discontinuous at x = 0 because

f(x) will be continuous at those points only where rational and irrational values coincide i.e. ex = e1 - x ⇒ ex = 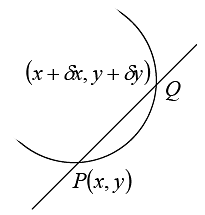 Therefore the equation of the tangent is Y - y =

Normal at (x, y)The normal at (x, v) being perpendicular to tangent will have its slope as

Geometrical meaning of dy/dxdv/dx represents the slope of the tangent to the given curve y = f(x) at any point (x, y)∴

direction of x-axis.In case we are to find the tangent at any point (x1, y1) then

i.e. the value of

at (x1, y1) will represent the slope of the tangent and hence its equation in this case will be

Condition for tangent to be parallel or perpendicular to x-axis

For the function y = f (x) at the maximum as well as minimum point the tangent is parallel to x-axis so that its slope is zero.Calculate

and solve for x. Suppose one root of

Differentiation of implicit functions f(x, y) = c be an implicit relation between x and y which defines as a differential function of x then

Maxima and Minima (of function of two independent variables)

The necessary condition that f (x, y) should have maximum or minimum at x = a, y = b is that

Sufficient condition for maxima and minima

Example 5: Find the first and second partial derivatives of z = x3 + y3 - 3axy and prove that

This is an important partial differential equation, known as wave equation.

Substituting the values of

∴ z is a homogeneous function of degree 2 in x and y .By Euler’s theorem, we get

Example 11: If z is a homogeneous function of degree n in x and y , show that

(i)Differentiating (i) partially w.r.t. x, we get

(ii)Again differentiating (i) partially w.r.t. y , we get

Multiplying (ii) by x and (iii) by y and adding, we get

x = et and v = t2, find du/dt as a function of t. verify your dt result by direct substitution.

Example 13: If x increases at the rate of 2 cm /sec at the instant when x = 3 cm . and at what rate must y be changing in order that the function 2xy - 3x2y shall be neither increasing nor decreasing?

and u is neither increasing nor decreasing ,i.e.,

If u, v and w are functions of independent variable x, y and z then the determinant 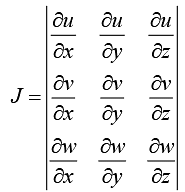 is called the Jacobian of u , v and w with respect to of x, y z which is written as

3. If u1, u2, u3 instead of being given explicitly in terms x1, x2, x3 be connected with them equations such as

If a function f(x) has continuous derivatives up to (n + 1)th order, then this function can be expanded in the following way:

where Rn called the remainder after (n + 1) terms, is given by

When this expansion converges over a certain range of x that is,

then the expansion is called Taylor Series of f(x) expanded about a.If a = 0, the series is called Maclaurin Series:

Changing a to 0 and h to x one will get