Anion of carbon is known as carbanion. Carbanion carriers three bond pairs and one lone pair, thus making the carbon atom negatively charged. So carbanion may be represented as

Hybridisation and gemometry: Alkyl carbanion has three bond pairs and one lone pair. Thus hybridisation is sp3 and geometry is tetrahedral (shape: pyramidal).

Note: Geometry of allyl and benzyl carbanion is almost planar and hybridisation is sp2.

(i) There are eight electrons in the outermost orbit of carbanionic carbon hence its octet is complete.

(ii) It behaves as charged nucleophile.

(iii) It is diamagnetic in character because all eight electrons are paired.

(iv) it is formed by heterolytic bond fission.

(vi) It reacts with electrophiles.

(B) Generation of Carbanions

Three principal ways in which carbanions are generated are

(a) Action of base on carbon acids. 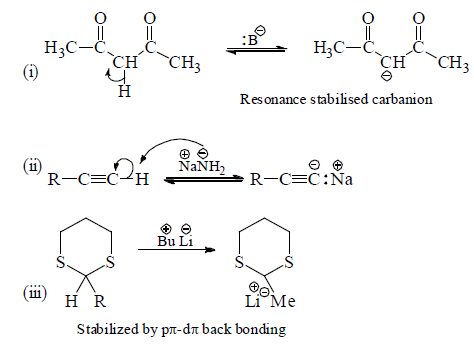 (b) A negative ion adds to C—C multiple bond.

Reactions in which product formation takes place by formation of carbanion as reaction intermediate:

In the following reactions formation takes place by the formation of carbanion as reaction intermediates.

(a) As a base it pickup acidic proton.

(b) As a nucleophile: This is one of the best method by the which C—C bond formation takes place.

(iii) It may pickup β -H to give elimination product

(i) Electronegativity of carbanionic carbon:

(a) Anions in which negative charge is present on carbon of aromatic system is known as aromatic carbanions.

(b) Aromatic carbanions are most stable carbanions.

(c) Anions obeying Huckel rule are stable because they are aromatic and there is complete delocalisation of negative charge.

With aromaticity as the factor for stability, few carbanions and their stability order is:

(iv) Inductive effect: Stability of carbanions depends on the +I or –I groups as follows:

(b) –I group: Stability of  carbanions∝– I power of the group

(v) Stablisation by Sulphur and Phosphorus: Attachment of carbanionic carbon of a sulphur and phosphorus atom causes an increase in carbanion stability.

The cause of stability is due to the delocalisation of negative charge of carbanion by vacant d-groups stabilise carbanion by resonance effect. 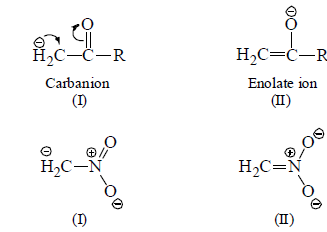 Contribution of structure (II) is more than (I) because in (II) negative charge is present on electronegative oxygen.

Some examples for illustration: