The adders described in this module are generally called Ripple Carry Adders because of the way that the carry bit is propagated from one stage of the adder to the next, rippling through the chain of full adders until the carry out is produced at the carry out pin of the final stage.

This process takes some time, which is proportional to the number of bits added. Although this may be a minor problem in small adders, with an increase in the number of bits in the binary words to be added, the time delay before the final carry out is produced becomes unacceptable.

To overcome this problem, IC manufacturers offer a range of ‘Carry Look Ahead Adders’ in which the addition and carry out are produced simultaneously. The system uses complex combinational logic to assess whether, at each individual adder a carry will be produced, based on the state of the A and B inputs to that stage, and the logic state of the carry in bit to the first stage. 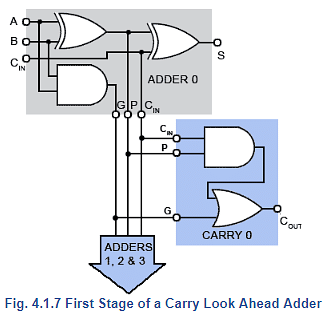 Fig. 4.1.7 shows an arrangement for producing a carry out by splitting the full adder into a partial full adder (grey block), which has two additional outputs, a propagate (P) output that takes a logic 1 output whenever inputs A and B are 1,0 or 0,1 and a generate (G) output that will be logic 1 whenever the A and B inputs are at 1,1. Using this information it is possible to decide on the logic state of the carry out depending on a combination of the CIN state and the A and B states.

In the carry generator (blue block), the P input is ANDed with the CIN and ORed with the G input to produce a carry out. The carry out is fed to the successive adders in the normal way, but the CIN P and G signals are fed in parallel to the other adder stages, where the state of the carry out for each adder stage can be ascertained from the shared CIN signal and the A and B states for the successive stages, depending on the input states at each stage, rather than waiting for the calculations to complete at all the stages.

A generalised arrangement in block diagram form (Fig.4.1.8) shows the carry out (COUT) being produced by the parallel carry generator from the A and B input signals and the CIN signal, rather than from the carry out of the final adder stage as in the ripple adders. 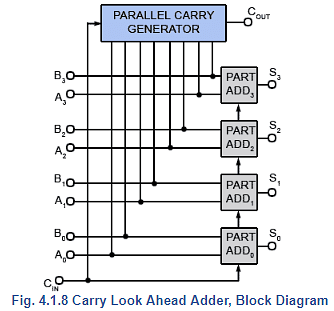 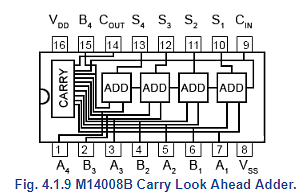