(ii) Article 75 - Other Provisions as to Ministers

(iii) Article 77- Conduct of business in the Government of India

(v) Article 88 - Rights of Ministers as Respects the Houses

Nature of Advice by Ministers

Oath & Salary of Ministers(i) Before a minister enters upon his office, administers to him the oaths of office and secrecy In his oath of office, the minister swears:

(ii) In his oath of secrecy, the minister swears that he will not directly or indirectly communicate or reveal to any person(s) any matter that is brought under his consideration or becomes known to him as a Union minister except as may be required for the due discharge of his duties' as such minister.(iii) The salaries and allowances of ministers are determined by Parliament from time to time.(iv) A minister gets the salary and allowances that are payable to a member of Parliament.(v) Additionally, he gets a sumptuary allowance (according to his rank) free accommodation, travelling allowance, medical facilities, etc.

Composition of The Council1. The council of ministers consists of three categories of ministers, namely, cabinet ministers, ministers of state, and deputy ministers.2. At the top of all these ministers stands the Prime Minister -the supreme governing authority of the country(a) Cabinet Ministers: The cabinet ministers head the important ministries of the Central government Like home, defence, finance, external affairs and so forth. They are members of the cabinet, attend its meetings and play an important role in deciding policies.(b) Ministers of State

Distinction Between Council of Ministers and Cabinet 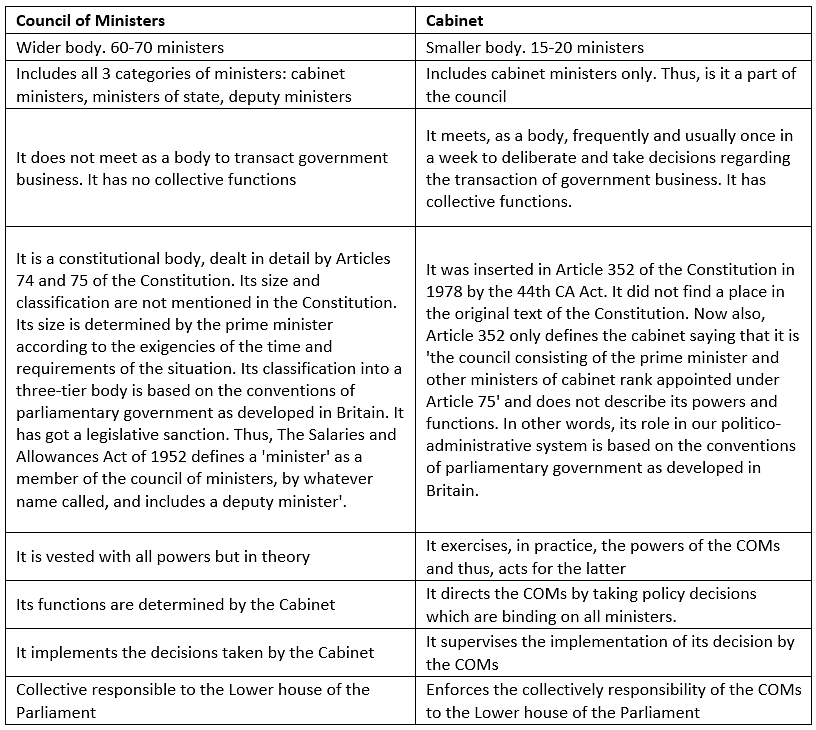 Role of The Cabinet