The document Centre of Mass, Conservation of Linear Momentum (Part - 1) - Physics, Solution by DC Pandey NEET Notes | EduRev is a part of the NEET Course DC Pandey (Questions & Solutions) of Physics: NEET.
All you need of NEET at this link: NEET

Ques 1: What is the difference between centre of mass and centre of gravity?Ans:

Sol: If a body is placed in a uniform gravitational field, the CG of the body coincides with the CM of the body.

If a body is placed in a uniformly increasing gravitational field Ques 9: Find the position of centre of mass of the section shown in figure.Note- Solve the problem by using both the formulae: 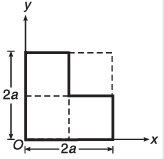