Consider a system composed of N particles with each particle's mass described by mi, where i is an index from i = 1 to i = N . The total mass of the system is denoted by M,

where the summation over i runs from i = 1 to i = N.Such a system is displayed in figure given. If the vector connecting the origin with the ith particle is ri then the vector defining the position of the system's center of mass is 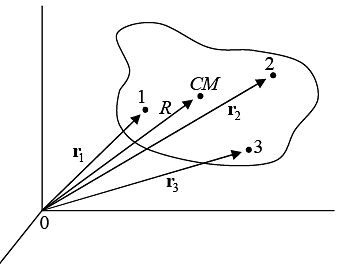 The position of the centre of mass is defined by RCM ≡

For N number of mass elements, if rj is the position of the jth element, and mj is its mass, then the center of mass is defined as

respectively. Find the position vector of their centre of mass.

Example 2: Four particles of mass 1 kg, 2kg, 3kg and 4kg are placed at the four vertices A,B, C and D of a square of side 1 m. Find the position of centre of mass of the particles. 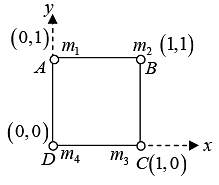 A rigid body is defined as system of particles in which the distance between any two particles remains fixed throughout the motion.

Degree of Freedom of Rigid Body 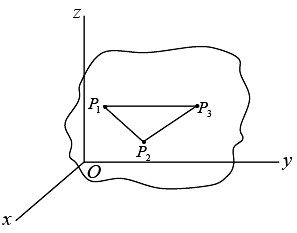 Center of Mass of Continuous System

The result is not rigorous, since the mass elements are not true particles. However, in the limit where N approaches infinity, the size of each element approaches zero and the approximation becomes exact.

This limiting process defines an integral.

where dm is a differential mass element. Then,

To visualize this integral, think of dm as the mass in an element of volume dV located at position r. If the mass density at the element is ρ, then dm = ρdV and

integral is called a volume integral.Example 3: A rod of length L is placed along the x - axis between x = 0 and x = L. The linear density (mass/length) λ of the rod varies with the distance x from the origin as λ = Rx . Here, R is a positive constant. Find the position of centre of mass of this rod.

Mass of element dx situated at x = x isdm = λdx = Rx dxThe COM of the element has coordinates (x,0,0).Therefore, x -coordinate of COM of the rod will be

The y -coordinate of COM of the rod is yCOM

Example 4: Find the center of mass of a thin rectangular plate with sides of length α and b, whose mass per unit area σ varies in the following fashion:σ = σ0(xy/αb) where σ0 is a constant.

We find M , the mass of the plate, as follows: 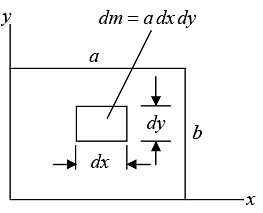 We first integrate over x , treating y as a constant.

The x component of R is 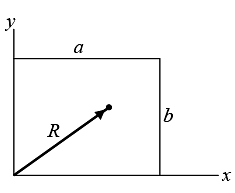 Example 5 : Find the centre of mass of semicircular disc of mass M and radius R. 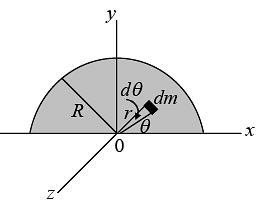 Example 6: Find the centre of mass of a hollow hemisphere of radius R and mass M. 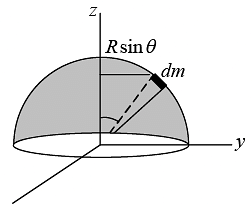 Second methodThe integral is over three dimensions, but the symmetry of the situations lets us treat it as a one dimensional integral. We mentally subdivide the hemisphere into a pile of thin disks. Consider the circular disk of radius r and thickness dz . Its volume is dV = πr2dz , and its mass isdM = ρdV= (M/V) dV, where V = 2/3 πR3.

Example 7: Find the centre of mass triangular plate of Mass M .  Where l and h are given parameter shown in figure. 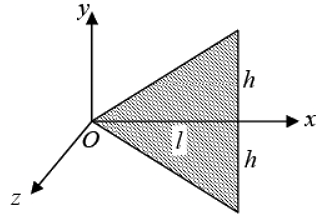 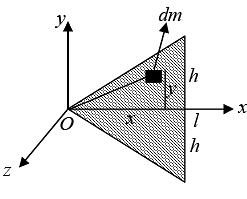 lf some mass M1 is removed from a rigid body of mass M , then the position of centre of mass of the remaining portion is obtained from the following formulae:

the values for the mass which has been removed.

Example 8: Find the position of centre of mass of the remaining plate when a circle is cut from right half radius of circle is l/8. Centre of circle is in centre of the right part of the plate. 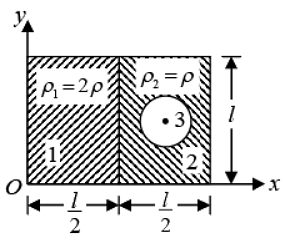