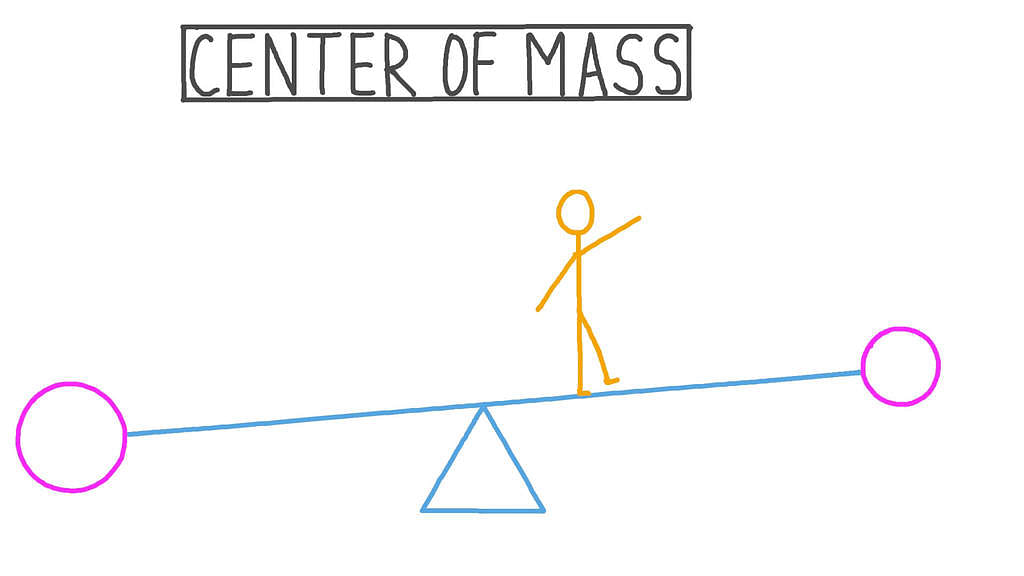 Centre of Mass of a System of `N' Discrete Particles 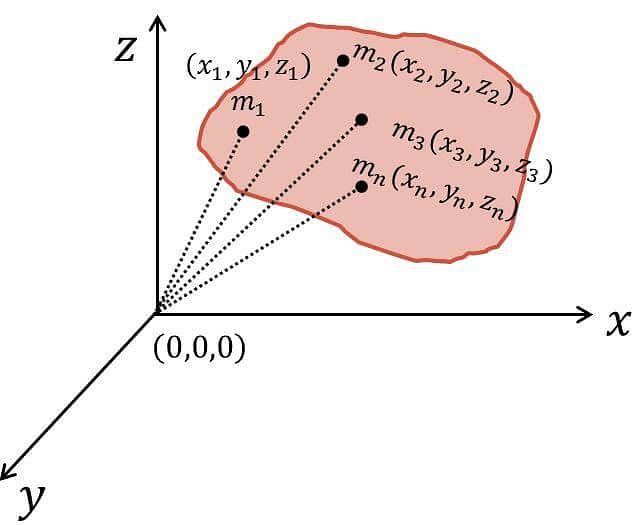 ; where,  is called the moment of mass of particle with respect to origin. is the total mass of the system.Further,

So, the cartesian co-ordinates of the COM will bexcom = or xCOM =

Position of COM of two Particles

Consider two particles of masses m1 and m2 separated by a distance l as shown in figure.

Let us assume that m1 is placed at origin and m2 is placed at position (l, 0) and the distance of centre of mass from m1 & m2 is r1 & r2 respectively.

Question for Centre of Mass
Try yourself:Can the centre of mass of the rigid body be located outside of the body?
Explanation

Since, both the particles lie on x-axis, the COM will also lie on x-axis. Let the COM is located at x = x, then

thus, the COM of the two particles is located at x = 2m.

Q.2. Two particle of mass 4 kg & 2 kg are located as shown in figure then find out the position of centre of mass.

First find out the position of 2 kg mass

So position of C.O.M is

Q.3. Two particles of mass 2 kg and 4 kg lie on the same line. If 4 kg is displaced rightwards by 5 m then by what distance 2 kg should be move for which centre of mass will remain at the same position.

Let us assume that C.O.M. lie at point C and the distance of C from 2 kg and 4 kg particles are r1 & r2 respectively. Then from relation

Alter: If centre of mass is at rest then we can write

Q.4. Two particles of mass 1 kg and 2 kg lie on the same line. If 2 kg is displaced 10 m rightwards then by what distance 1 kg should displaced so that centre of mass will displaced 2m right wards.

Initially let us assume that C.O.M is at point C which is r1 & r2 distance apart from mass m1 & m2 respectively as shown in figure.

Q.5. Three particles of mass 1 kg, 2 kg, and 3 kg are placed at the corners A, B and C respectively of an equilateral triangle ABC of edge 1 m. Find the distance of their centre of mass from A.

Assume that 1 kg mass is placed at origin as shown in figure. 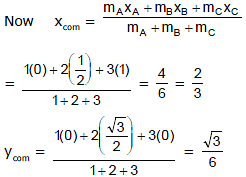 Position of centre of mass

distance of C.O.M from point

Centre of Mass of a Continuous Mass Distribution

For continuous mass distribution the centre of mass can be located by replacing summation sign with an integral sign. Proper limits for the integral are chosen according to the situation ...(i) = M (mass of the body)here x, y, z in the numerator of the eq. (i) is the coordinate of the centre of mass of the dm mass. =

Centre of Mass of a Uniform Rod

Question for Centre of Mass
Try yourself:Does the explosion of a projectile in mid-air effects the motion of the centre of mass?
Explanation

View Solution
The document Centre of Mass Notes | Study Physics Class 11 - NEET is a part of the NEET Course Physics Class 11.
All you need of NEET at this link: NEET
Join Course