One of the most effective and efficient methods of controlling the traffic on a highway is the adoption of high intersection geometric design standards. Channelization is an integral part of at grade intersections and is used to separate turning movements from through movements where this is considered advisable and hence helps reduce the intensity and frequency of loss of life and property due to accidents to a large extent. Proper Channelization increases capacity, improves safety, provides maximum convenience, and instils driver confidence. Improper Channelization has the opposite effect and may be worse than none at all. Over Channelization should be avoided because it could create confusion and worsen operations.

1. Channelization - It is the separation or regulation of conflicting traffic movements into definite paths of travel by traffic islands or pavement marking to facilitate the safe and orderly movements of both vehicles and pedestrians.

2. Conflict - It is defined as the demand for the same highway space by two or more users of the highway. Conflicts are classified into mainly three types: 4. Refuge Areas - The area which is used to give refuge to the pedestrians crossing a street (the open area between two medians) is known as a refuge area.

The use of Channelization is often creative and innovative, providing for vehicle path separation and distinct and thus in general making traffic flow safer, smoother, simpler and efficient. The main objectives of Channelization can be summarized as follows:

1. Separation of maneuver areas: The drivers should be presented with only one decision at a time to reduce confusion and the influence of operations caused due to the overlapping of maneuver areas.

2. Reduce excessively large paved areas: The spread of the paved area can be considerably reduced by the construction of raised islands and medians where these are considered safe and necessary. 5. Control of speed: Channelization is also used for supporting stop or speed regulations by removing differentials in speed for merging, diverging, weaving and crossing by using the bending and funneling techniques.

6. Protection and storage of turning and crossing vehicles: To shadow slow or stopped vehicles from other traffic flows.

9. Segregation of non-homogeneous flows: Channelization provides separate channels for turning and through, fast and slow, and opposite direction traffic.

10. Protection of pedestrians and reduction of crossing distances between refuses: Non-traversable and wide medians provide a refuge for pedestrians crossing a street.

Consider for example the T-intersection shown in Figs. 31:2, 31:3, and 31:4. In Fig. 31:2, the intersection has no special Channelization for helping drivers in avoiding conflicts between movements. In Fig. 31:3, a passing lane for through vehicles in the eastbound direction and a westbound right-turn lane has been added, which helps in separating the turning traffic from the through ones. In Fig. 31:4, the use of lanes is further clarified due to the addition of channelizing islands. Design of a channelized intersection usually involves the following significant controls: the type of design vehicle, the cross sections on the crossroads, the projected traffic volumes in relation to capacity, the number of pedestrians, the speed of vehicles, and the type and location of traffic control devices. Furthermore, the physical controls such as right-of-way and terrain have an effect on the extent of Channelization that is economically feasible. The degree to which each of these principles applies will depend upon the features mentioned above. While a principle may be modified in its application to a particular site, disregard of these may result in a hazardous design. The principles may be summarized as follows:

1. Reduction of the Area of Conflict: The impact area is decreased when Channelization is provided, and hence the probability of conflicts is also reduced. The figure below further clarifies the statement. Fig. 31:5 shows the conflict area in a Y-intersection without Channelization and Fig. 31:6 shows the reduced conflict area in the same intersection after providing medians. 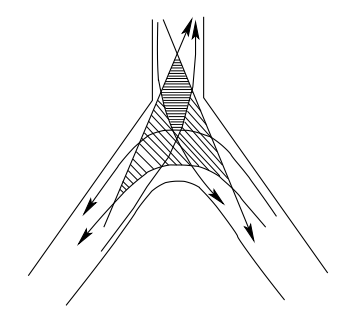 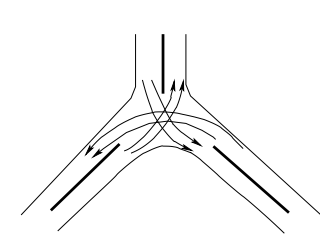 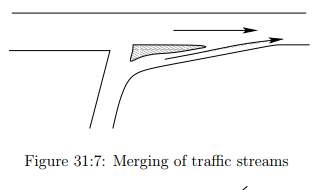 also small in such cases. The merging of roadways should be done as shown below in Fig. 31:7.

5. Protection for turning vehicles/crossing conflicting traffic streams: Provision of a refuge area between the two opposing streams allows the driver of a crossing vehicle to select a safe gap in one stream at a time and also provides a safer crossing maneuver. Fig. 31:10further clarifies the above statement. 6. Discourage prohibited turns by island placement and shape: Undesirable and prohibited turns can be discouraged by the proper selection of shape and location of the 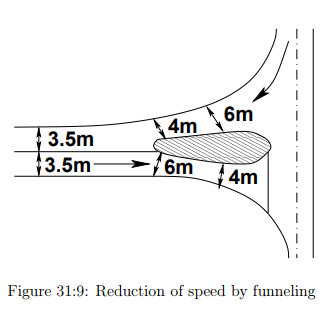 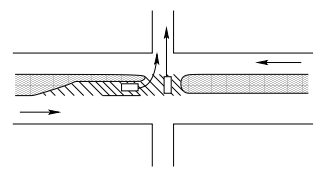 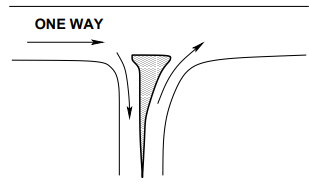 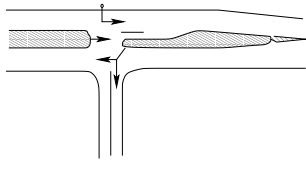 Figure 31:12: Location of signal posts on medians at intersections

islands. Fig. 31:11 shows how prohibited turns can be discouraged by proper shaping and placement of islands.

In this form of channelizing device, a raised wide separator is constructed between the 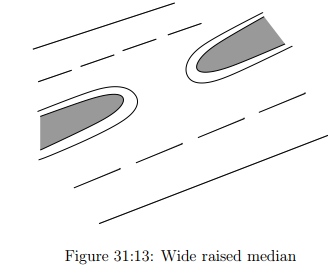 two opposing lanes and the space on the separator (median) is used either for planting some trees and/or for providing space for traffic signs etc. Fig. 31:13 shows a typical wide raised median on a freeway. A median varying between 1.2 m and 30 m in width may be employed. The higher values of width are adopted on freeways, where sufficient space is available for the construction of these. In addition, a well-landscaped wide median will also provide aesthetic benefits to the surrounding neighborhood. A wide median, if attractively landscaped, is often the most aesthetically pleasing separation method.

In this type of device, a narrower and a higher median than the traversable island is constructed between the opposing lanes. This class of device has the advantage of a narrower median, but its use should be restricted to approach roadways with vehicle speeds of 60 kmph or below. These are generally 15 to 20 cm high and about 60 cm in width. Due to the height, most of the vehicles are not able to cross the median, and hence the name. Fig. 31:14 shows a non-traversable raised island constructed on a roadway. These devices are substantial enough that each installation should be carefully designed, as an inappropriately placed median can constitute a hazard if struck by an errant vehicle and hence the severity and crash risk is highly increased on the roadways having non-traversable raised islands.

In this device, a narrow and mountable type of raised curb is constructed to separate the traffic moving in the opposing lanes. This class of channelizing device is the narrowest, and therefore the easiest to fit in a wide range of roadway cross-section widths. The curb 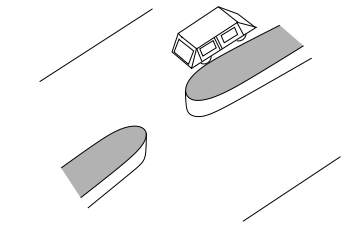 is up to 10 cm in height and up to about 30 cm in width. Curbs are formed with a rounded shape that will create minimal vehicle deflection upon impact. Generally, it is used with reboundable, reflectorized vertical panels to provide a visual deterrent to the drivers to cross over to opposite traffic lane. The main advantage of this type of device is that it can be installed on existing roadway centerlines, without the need for widening the roadway approaches to the crossing. Figs. 31:15 and 31:16 shows traversable raised curbs with and without vertical panels.

In this type of Channelization, a variety of treatments, including raising them above the pavement just slightly (2 to 5 cm); the application of pavement markings and other types of contrasting surfaces etc are possible. These may also be unpaved where they are 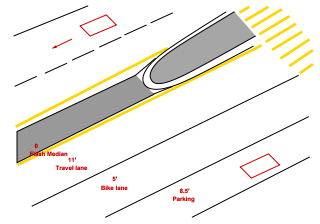 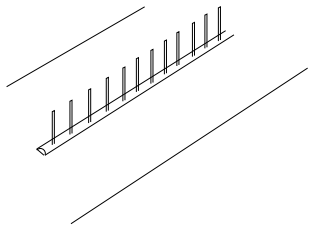 Figure 31:17: Flush island providing Channelization objectives formed by the pavement edges of existing roadways. In areas where snow plowing may be necessary, flush islands are the preferred design. Fig. 31:17 below shows how flush islands can also be used for achieving channelizing objectives. The area seen flushed with the road surface in Fig. 31:17 is the flush island.