Generally, two types of end shapes are used in practice:-semicircular shapes and bullet nose. The shape adopted normally depends on the effective median width at the end of the median. The dimensions of the various parameters for semi-circular and bullet nose ends area as: Semicircular- L = 2 × ControlR, R1 = M/2. Bullet-nose- L = ControlR, R1 = M/2, R2 = M/5 The criteria for the selection of median end is as given below in Table. 31:8. The two shapes 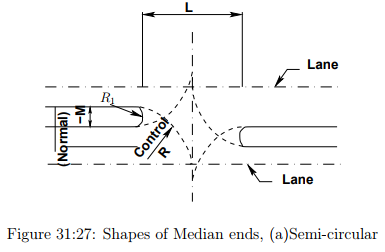 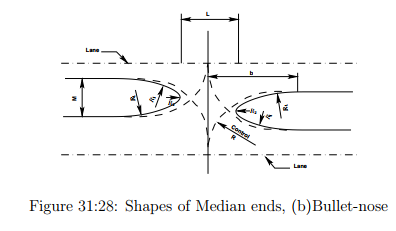 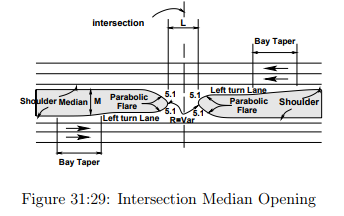 are illustrated in Figs. 31:27 and 31:28. The designer should evaluate each intersection to determine the best median opening shape that will accommodate the design vehicle.

Median openings, sometimes called crossovers, provide for vehicular crossings of the median at designated locations. The design of a median opening should be based on traffic volumes and types of turning vehicles. Cross and turning traffic must operate in conjunction with the through traffic on the divided highway. This requirement makes it necessary to know the volume and composition of all movements occurring simultaneously during the design hours. The design of a median opening becomes a matter of considering what traffic is to be accommodated, choosing the design vehicle to use for layout controls for each cross and turning movement, investigating whether larger vehicles can turn without undue encroachment on adjacent lanes and, finally, checking the intersection for capacity. If the capacity is exceeded by the traffic load, the design must be expanded, possibly by widening or otherwise adjusting widths for certain movements. Traffic control devices such as yield signs, stop signs or traffic signals may be required to regulate the various movements effectively and to improve the efficiency of operations. Median openings at close intervals on other types of highways create interference with fast through traffic. Median openings should be spaced at intervals no closer than 500 m. However, if a median opening falls within 100 m of an access opening, it should be placed opposite the access opening. Also, the length of median opening varies with width of median and angle of intersecting roads. Fig. 31:29 shows the intersection median opening. The median openings for the different classes of design vehicle are as given in the Table. 31:9.

1. Channelization is more of an art rather than science. Every intersection requires a special study because of variations in physical dimensions, turning movements, traffic and pedestrian volumes, type of traffic control etc.

2. In the next step several island configurations are considered and compared. Then a choice is made between curbed, raised islands and flush Channelization or pavement markings.

3. Next it must be checked that the design is compatible to handle turning movements of large vehicles. Also, it should be such that the vehicles are guided in normal wheel paths, so that the island does not create an obstruction in the roadway.

4. Signing and marking are redesigned to guide drivers and avoid confusion.