Soil Mechanics is a discipline of Civil Engineering involving the study of soil, its behaviour and application as an engineering material.

Formation of soils:In the Earth's surface, rocks extend upto as much as 20 km depth. The major rock types are categorized as igneous, sedimentary, and metamorphic.-Igneous rocks: formed from crystalline bodies of cooled magma.-Sedimentary rocks: formed from layers of cemented sediments.-Metamorphic rocks: formed by the alteration of existing rocks due to heat      from igneous intrusions or pressure due to crustal movement.

Soils are formed from materials that have resulted from the disintegration of rocks by various processes of physical and chemical weathering. The nature and structure of a given soil depends on the processes and conditions that formed it:-Breakdown of parent rock: weathering, decomposition, erosion.-Transportation to site of final deposition: gravity, flowing water, ice, wind.-Environment of final deposition: flood plain, river terrace, glacial moraine, lacustrine or marine.-Subsequent conditions of loading and drainage: little or no surcharge, heavy surcharge due to ice or overlying deposits, change from saline to freshwater, leaching, contamination.All soils originate, directly or indirectly, from different rock types.

Physical weathering reduces the size of the parent rock material, without any change in the original composition of the parent rock. Physical or mechanical processes taking place on the earth's surface include the actions of water, frost, temperature changes, wind and ice. They cause disintegration and the products are mainly coarse soils.Chemical weathering not only breaks up the material into smaller particles but alters the nature of the original parent rock itself. The main processes responsible are hydration, oxidation, and carbonation. New compounds are formed due to the chemical alterations.

The effects of weathering and transportation mainly determine the basic nature of the soil (size, shape, composition and distribution of the particles).The environment into which deposition takes place, and the subsequent geological events that take place there, determine the state of the soil (density, moisture content) and the structure or fabric of the soil.

TRANSPORTATION/ DEPOSITION:Soil is classified into two types.(i) Residual soil:-Residual soils are found at the same location where they have been formed. Generally, the depth of residual soils varies from 5 to 20 m.-Accumulation of residual soils takes place as the rate of rock decomposition exceeds the rate of erosion or transportation of the weathered material.-Residual soils comprise of a wide range of particle sizes, shapes and composition.(ii) Transported soil :-Weathered rock materials can be moved from their original site to new locations by one or more of the transportation agencies to form transported soils.-Tranported soils are classified based on the mode of transportation and the final deposition environment as follows:1.Soils that are carried and deposited by rivers are called alluvial deposits.2. Soils that are deposited by flowing water or surface runoff while entering a lake are called lacustrine deposits. Atlernate layers are formed in different seasons depending on flow rate.3. If the deposits are made by rivers in sea water, they are called marine deposits.4. Melting of a glacier causes the deposition of all the materials scoured by it leading to formation of glacial deposits.

SOME IMPORTANT SOILS:Black cotton soil-A large part of central India and some portion of South India is covered with Black cotton soil.-It has clay mineral montmorillonite due to this it has high swelling ,-Shrinkage and plasticity properties.-Shearing strength of soil is very low.

Standard Sand of India : - Ennore Sand (Madras)1.LOAM SOILIt is the mixture of sand + silt + clay2.BENTONITE SOILIt is chemically weathered volcanic ash that is generally used as lubricant in drilling.It is a clay with montmorillonite.Application found in pile foundation.3.Lithification: The process by which unconsolidated material are converted into a soil rock by compaction or cementation.4.Indurated clay: Hardening of clay due to heat and pressure.

PHASE DIAGRAM:Soil mass is in general a three phase system composed of solid, liquid and gaseous matter.The diagrammatic representation of the different phases in a soil mass is called the “phase diagram”.A 3-phase system is applicable for partially saturated soil whereas, a 2-phase system is for saturated and dry states of soil. 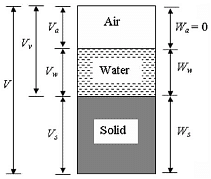 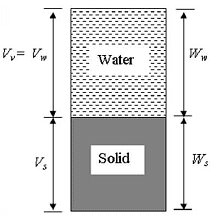 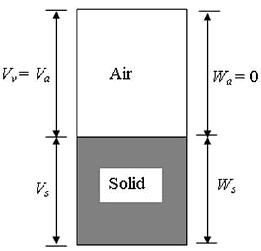 where, WW = Weight of water, WS= weight of solids.

where, VV = Volume of Voids Vs= Volume of solids.Void ratio of fine grained soils are generally higher than those of coarse grained soils.In general e > 0 i.e., no upper limit for void volume.

(b) Dry Unit Weight is the weight of soil solids per unit volume.

(c) Saturated unit weight(when soil is completely saturated, S = 100%,Va=0) : It is the ratio of total weight of fully saturated soil sample to its total volume.

(d) Submerged unit weight or Buoyant unit weight(when soil is below ground water table, S = 100%): It is the submerged weight of soil solids per unit volume.

METHODS FOR DETERMINATION OF WATER CONTENT:(i) Oven Drying Method-Simplest and most accurate method.-Soil sample is dried in a controlled temperature.-For organic soils, temperature is about 60ºC.-Sample is dried for 24 hrs.-For sandy soils, complete drying can be achieved in 4 to 6 hrs.-Water content is calculated as:

(iv) Sand Bath Method-quick, field method-used when electric oven is not available.-soil sample is put in a container & dried by placing it in a sand bath, which is heated on kerosene stove.-water content is determined by using same formula as in oven drying method.

(v) Torsion Balance Moisture meter Method-quick method for use in laboratory.-Infrared radiations are used for drying sample.-Principle: The torsion wire is prestressed accurately to an extent equal to 100% of the scale reading. Then the sample is evenly distributed on the balance pan to counteract the prestressed torsion and the scale is brought back to zero. As the sample dries, the loss in weight is continuously balanced by the rotation of a drum calibrated directly to read moisture% on wet basis.

-Pycnometer method is used.-Instead of pycnometer, Density bottle (50 ml) OR Flask (500 ml) can also be used.

NOTE:1.Specific gravity values are generally reported at 27ºC (in India).2.If TºC is the test temperature then Sp. Gr. at 27ºC is given by,

3.If kerosene (better wetting agent) is used instead of water then,