There are the following Network Theorems:

Example: Consider the circuit shown below. Find the equivalent Thevenin’s voltage between nodes A and B.

The equivalent thevenin’s model of the circuit shown is

Example: Find the current flowing between terminals A and B of the circuit shown below.

Solution: The magnitude of the current in Norton’s equivalent circuit is equal to the current passing through the short-circuited terminals that are I=20/5=4A.

Try yourself:Find the equivalent resistance between terminals A and B of the circuit shown below.
Explanation

Example: For the given circuit, the current I is:

Due to voltage source:

Try yourself: In Superposition theorem, while considering a source, all other current sources are?
Explanation

Try yourself:In the circuit given below, the current through the 12 Ω resistance is _________

Power delivered to RL is:

To determine the value of R for maximum power transferred to the load,

We arrive at the condition:

Example: Find the current through 3Ω resistors in the circuit shown below.

Try yourself:Determine the current flowing in the ammeter having 1Ω internal resistance connected in series with the 6Ω resistor as shown in the below circuit. 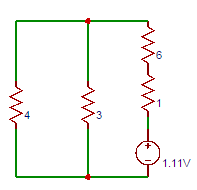 Try yourself:The resistance of a strip of copper of rectangular cross section is 2 Ω. A metal of resistivity twice that of a copper is coated on its upper surface to a thickness equal to that of copper strip. The resistance of composite strip will be _________
Explanation

Given that copper and coated metal strip have resistance of 2 ohms respectively. These two strips are connected in parallel.
Hence, the resistance of the composite strip = 2X42+4
= 86=43 Ω.