The differential equation of laminar flow is given by,μd2v/dy2 = Δp/Δx Steady Laminar Flow in Circular Pipes (Nagen - Poiseulle flow) In a circular pipe with steady laminar flow, the shear stress t varies linearly along the radius of the pipe as,

The negative sign on x  indicates decrease in pressure in the direction of flow..The pressure must decrease because pressure force is the only means available to compensate for resistance to the flow, the potential and kinetic energy remain constant. Fully developed horizontal pipe flow is merely a balance between pressure and viscous forces–the pressure difference acting on the end of the cylinder of area πr2 and the shear stress acting on the lateral surface of the cylinder of area  2πrl. This force balance can be written asp1πr2−(p1−∆p)πr2−2πr/τ=0 ∴ Δp/l= 2τ/rFor laminar flow of a Newtonian fluid, the shear stress is simply proportional to the velocity gradient,τ=μdu/dy.   In the notation associated with our pipe flow, this becomes       τ=−μdu/dr By combining the above two equations, we obtain       du/dr=−(∆p/2μl)which can be integrated to give the velocity profile:      u=−(∆p/4μl).r2 + C1  where C1 is a constant. Because the fluid is viscous, it sticks to the pipe wall so that 'u=0' at 'r=D/2'. Thus, C1=4R2.(∆p/16μl). Hence, the velocity profile can be written as

where Vmax= (ΔpR2/4μl) is the centerline velocity i.e. at the center of the pipe.By definition, the average velocity is the flow rate divided by the cross-sectional area,V=qv/πR2 so that for this flow,

so mean velocity of flow occurs at a radial distance of 0.707 R from the centre of the pipe. Pressure drops

Putting the value of vmax in the above equation,

This above equation is commonly referred to as Hagen-Poiseuille’s law. The velocity and shear stress distribution are as shown below : 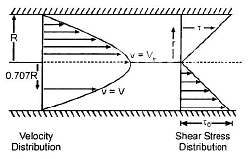 Laminar Flow Between Parallel Plates Case 1 : Both plates are at Rest   Using the Navier-Stokes equations, we can determine the flow between two fixed horizontal, infinite parallel plates.  In order to to this, we will need to describe how the fluid particles move.  For this case, there will be no flow in the y or z direction; v = 0 and w = 0.  As a result, all of the fluid flow will be in the x-direction.  Hence, the resulting continuity equation will be ∂u/∂x=0.  In addition,  u will have no variation in the z-direction for the infinite plates. This means that the stead flow ∂u/∂t = 0 so that u = u(y)  Taking these conditions into account the Navier-Stokes equation will be reduced the following equations.(Eq 1) = -∂p/x+u (∂2u/∂y2)   (Eq 2)  = -∂p∂y - ρg   (Eq 3)  = -∂p∂zIn these equations, gx=0, gy = -g, and gz=0.

As a result, the y-axis will point up. Next, we will integrate equation 2 and 3 to generate the following equation. In turn, this shows that there is a variation of pressure hydrostatically in the y-direction.Next, equation 1 will be rewritten into the following form and integrated twice.After integrating and determining all the constants,the velocity distribution can be fully derived.

In turn, the resulting velocity profile between the fixed plates is parabolic.Volume Rate of Flow: The volume flow rate ,q, represents the total volume of fluid pass between the two plates.

Mean Velocity: In turn, taking in consideration that the pressure gradient is inversely proportional to the viscosity and has a strong dependence on the gap width, the mean velocity can be determined.

The distribution of shear stress is given by 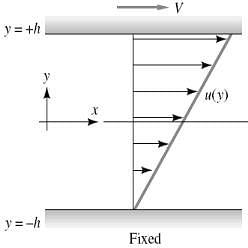 Consider two-dimensional incompressible plane(∂/∂z=0) viscous flow between parallel plates a distance 2h apart, as shown in fig.. We assume that the plates are very wide and very long , so the flow is essentially axial, u≠0 but v=w=0. The present case is where the upper plate moves at velocity 'V' but there is no pressure gradient. Now, by applying the continuity equation and integrating, then finding the constants, we get the velocity distribution:

(b) In case of laminar flow through parallel plates : hf =

(d) The general equation is

where, hf = loss of head in length LV = mean velocity of flowD = characteristic dimension representing the geometry of passage.k = constant, whose value depends upon the shape of passage.