Design of Disc or Plate Clutch 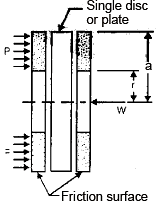 Let, T = torque transmitted by the clutchp = intensity of axial pressure with which the contact surface are held together,r1 and r2 = External and internal radius of friction facesr = Mean radius of the friction facesµ = coefficient of friction.Frictional force on the ring acting tangentially at radius, xFx = µp.2px.dx Frictional Torque acting on the ring,

where, W = Axial thrust with which the frictional surfaces are held together.

Total frictional torque acting on the friction surface or on the clutch,

Let, p, is the pressure intensity at a distance x from the axis of the clutch. p.x = c (a constant)Total force acting on the friction surface,