The document Chapter 13 - Foreign Exchange Rate - Chapter Notes, Macro Economics, Class 12 Commerce Notes | EduRev is a part of the Commerce Course Economics for CBSE Class 12 Board Examinations.
All you need of Commerce at this link: Commerce

FOREIGN EXCHANGE RATE :: It refers to rate at which one unit of currency of a one country can be expressed // exchanged for the number of units of currency of another country .

(A) FIXED EXCHANGE RATE :: It means that rate of exchange which is OFFICIALLY FIXED (or pegged ) in terms of gold ( or any other currency ) by the government and adjusted only infrequently . Thus it has two variants

(1) It ensures STABILITY in international money market by avoiding day to day fluctuations.
(2) It implies low risk and low uncertainty and thus ENCOURAGE INTERNATIONAL TRADE
(3) It helps in FORMULATION of long term economic policies especially related to exports and
imports and COORDINATION OF MACRO POLICIES in different countries of the world.
(4) It PREVENTS CAPITAL OUTFLOW and and thus prevent speculation
(5) It PREVENTS MAJOR ECONOMIC DISTURBANCES in the member country .
(B) FLEXIBLE EXCHANGE RATE // FLOATING RATE :: It is the rate which
is determined BY THE DEMAND FOR AND SUPPLY OF THE CURRENCIES in the foreign exchange market.

Thus in this value of currency is allowed to fluctuate or adjust freely according to change in Demand for and supply of Foreign currency. There is no official intervention by Central Bank of the country .

The exchange rate is called as Par Rate oF Exchange and is Equilibrium rate.

(1) There is NO NEED TO MAINTAIN INTERNATIONAL RESERVES for the government
(2) It provides EFFICIENCY IN RESOURCE ALLOCATION in an optimum way and thus
improves efficiency
(3) It INCREASES MOVEMENT OF CAPITAL across different countries of the world as no
huge reserves are to be maintained
(4) It PROMOTES VENTURE CAPITAL (investment in foreign exchange to earn profit.
(5) There is no problem of undervaluation or overvaluation of currency. Deficit or Surplus BOP is automatically corrected under this system

(C) HYBRID SYSTEM OF EXCHANGE RATE :: Those system which are neither fully Fixed systems nor fully flexible systems.

These are often referred to as ALTERNATIVE SYSTEM OF EXCHANGE RATE which combine the merit of both Fixed and flexible system of exchange rate. Some of these
system are
(1) WIDER BAND :: Wider band is a system that ALLOWS WIDER ADJUSTMENT in the fixed exchange rate system.
Acc. to this system a country
- specifies a parity value for its currency and
- allows adjustment upto 10 % around parity between any two currencies.

This is to help the member countries to correct their BOP (balance of payments) status. In the event of deficit BOP, India, for example, may depreciate its currency (upto 10 per cent). This is expected to increase demand for India’s products. Accordingly, BOP status is expected to improve.

(3) MANAGED FLOATING :: Under this system , the exchange rate is managed or controlled by the GOVERNMENT OR MONETARY AUTHORITY . Thus it is a system of gradual adjustment in the exchange rate by a central bank to influence the value of its own currency in relation to other currency.

AIM :: Under this system, which is not supported by any international agreement , the central banks manage to intervene in the international exchange market with a view to keep the exchange rate within desired limit

RELATED TO :: One of concept related to managed floating is DIRTY FLOATING which refers to situation when managed floating is exercised without caring for the rules and regulations . Thus Dirty Floating results in manipulation ofexchange rate against the interest of other country.
Example :: Keeping Domestic currency value low so that domestic good continue to remain cheap and have more export

WORKING OF MANAGED FLOATING :: It is through the sale and purchase of foreign currency in the international money market .
Suppose the Central Bank realises that the market value of rupee is heavily depreciating
against US dollar

FOREIGN EXCHANGE MARKET :: It refers to market where National currencies of various countries are converted, exchanged and traded for one another i.e buying and selling of foreign exchange takes place.

It is not any physical place but is a network of communication system which connects the whole complex of institution and includes ommercial bank, Brokers , Official govt. agencies , Foreign exchange dealers

(a) Purchase of goods and services from ROW i.e Import
(b) Payment of international loans
(c) Gifts and grants to ROW
(d) Investment in ROW for financial assets ( like shares , bonds) and real assets (building , shop)
(e) To speculate on value of Foreign currencies
(f) To undertake foreign tour and for foreign education
(g) Remittances by foreigners working in the country to their families abroad

SUPPLY FOR FOREIGN EXCHANGE :: There is an POSITIVE RELATION between foreign exchange rate and supply of foreign currency. Hence supply curve is UPWARD SLOPING

(a) Sale of goods and services to ROW i.e Export
(b) Borrowing From IMF,World Bank and Foreign Govt.
(c) Gifts and grants from ROW
(d) Investment in home country through Joint ventures and financial market operation
(e) To speculate by non-resident in domestic T.
(f) Foreigner undertake tour of domestic country
(g)Remittances by resident abroad to their families in domestic territory

The theory of determination of rate of exchange is the Demand and Supply theory.It is the rate which is determined BY THE DEMAND FOR AND SUPPLY OF THE CURRENCIES in the foreign exchange market.

Thus in this value of currency is allowed to fluctuate or adjust freely according to change
in Demand for and supply of Foreign currency. There is no official intervention by Central
Bank of the country .

There is an positive relation between foreign exchange rate and supply of foreign currency. Hence supply curve is Upward sloping . 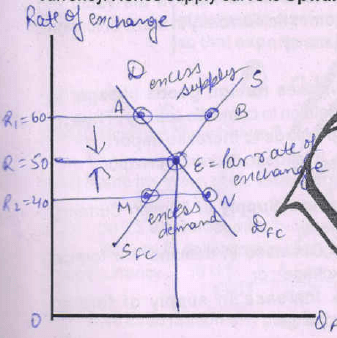 (Ques) In the following cases, indicate which currency is appreciating and which one is depreciating :