Chapter 14 Deep FoundationBEARING CAPACITY OF PILESThe ultimate bearing capacity of a pile is the maximum load which it can carry without failure or excessive settlement of the ground. The bearing capacity also depends on the methods of installation.A. Analytical Method
(i) 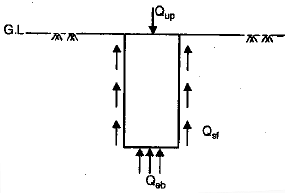 where, a = Adhesion factora

= Unit adhesion between pile and soil.

= Average Cohesion over depth of pile.

where, Fs = Factor of safety

B. Dynamic Approach:Dynamic methods are suitable for dense cohesionless soil only.
(i) Engineering News Formula
(a)

where P = Steam pressure and a = Area of hammer on which pressure acts.

(C) Field Method
(i) Use of Standard penetration Data

UNDER-REAMED PILEAn ‘under-reamed’ pile is one with an enlarged based or a bulb: the bulb is called ‘under-ream’. Under reamed piles are cast -in-situ piles , which may be installed both in sandy and in clayey soils. The ratio of bulb size to the pile shaft size may be 2 to 3; usually a value of 2.5 is used.

where,
qc = Static cone resistance of the base of pile in kg/cm2.

= Average cone resistance over depth of pile in kg/cm2.Ab= π/4 .(bu)2=Area of bulb (m2).
NEGATIVE SKIN FRICTION:
Negative skin friction is usually a downward shear drag acting on a pile or pile group because of downward movement of surrounding soil relative to the piles. This shear drag movements are anticipated to occur when a pile penetrates into compressible soil layer that can consolidate.
It is reported that, A small relative movement between the soil and the pile of around 10 mm may be adequate for the full negative skin friction to materialize.

(i) Negative skin friction of piles in cohesive soil

where,
α= adhesion factor
cu=Undrain Cohesion of the compressible layer 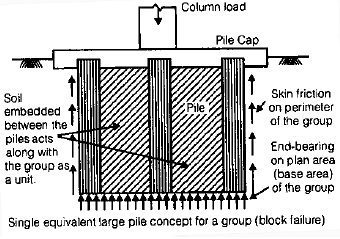 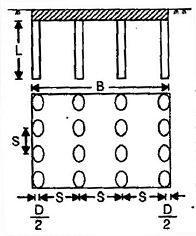 (iii) In case of Sand

where, B = Size of pile group in meter.