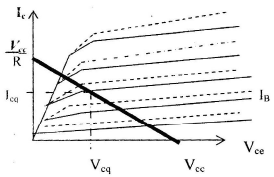 Once the 0-point has been fixed due to some biasing arrangement it has to be stabilized against the variation in:

In Si transistor. Ico, is of the order of nano amperes compared to milliamps in Ge and so thermal runway and instability is more problem in Ge transistor.

a) Better than fixed biased circuit.

b) bRc >> Rb as this will give very small value as stability as near to 1.

Drawback of Collector to Base Bias 

where S2: Stability (S) at b = b2.Total increment in Ic is the sum of all three increments due to Ico, b , and Vbe.

And IB =I – IoFrom collector current expressionIc = b  Ib + (1 + b) Ico = b Io + (1 + b) Ico= bI – b Io+ b ICo if b >> and Io of diode and Ico of transistor track each other over the desired temperature rang, then Ico remains essntially constant.Reverse saturation current Io flows through the diode. If Ico increases due to temperature, the increased current flows through diode decreasing Ib keeping Ib constant.

Thermistors are temperature sensitive element, which has a negative temperature coefficient of resistance.The thermistor element is placed parallel to and across Vcc and E. R2 of potential divider bias. Increase of temperature reduces resistance and decrease the forward bias reduces Ib and Ic.

Sensistor Compensation It may be placed either in parallel with R1 or parallel with RE. It can also placed in place of RE rather than in parallel with RE.FET Biasing For the field-effect transistor, the relationship between input and output quantities is nonlinear due to the squared term in Shockley’s equation. The nonlinear relationship between ID and VGS can complicated the mathematical approach to the dc analysis of FET configurations. A graphical approach may limit solutions to tenths-place accuracy, but it is a quicker method for most FET amplifiers.Another distinct difference between the analysis of BJT and FET transistors is that the input controlling variable for a BJT transistor is a current level, while for the FET a voltage is the controlling variable. In both cases, however, the controlled variable on the

output side is a current level that also defines the important voltage levels of the output circuit.

Is For JEETS and depletion-type MOSFETs, Shockley’s equation is applied to re-late the input and output quantities:

For Enhancement MOSFET ID = k (VGS – Vr)2It is particularly important to realize that of the equations above are for the device only! They do not change with each network configurations. So long as the device is in the active region.