where, IG = Moment of inertia about centre of gravity of the body. -Pressure Force on curved surfaces: Horizontal component of the resultant hydrostatic force 'Fx' of curved surface may be computed by projecting the surface upon a vertical plane and multiplying the projected area by the pressure at its own centre of area.-Vertical component of force 'Fy' is equal to the weight of the liquid block lying above the curved surface upto free surface.Resultant Force

-Depth of center of pressure for some vertical plane surfaces

Archimedes principle and Force of buoyancy: For stable equilibrium of a circular cone floating with its apex downward having diameter 'd' and a vertical height 'h'. (The specific gravity of the cone is 'S'), The condition for stability is

(i) Forced Vortex Flow: When a fluid is rotated about a vertical axis at constant speed, such every particle of its has the same angular velocity, motion is known as the forced vortex.Forced vortex requires constant supply of external energy/torque. h=ω2r2/2g 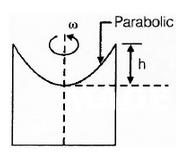 (ii) Free Vortex Flow: -In this flow fluid mass rotates due to conservation of angular momentum. No external torque or energy is required. In free vortex flow Bernoulli's equation can be applied. The velocity profile is inversely proportional with the radius.v r = constant-The point at the centre of rotation is called singular point, where velocity approaches to infinite.-Example of free vortex motion are whirling mass of liquid in wash basin, whirlpool in rivers etc.