FOLLOWING ARE THE MATERIALS TO DEAL WITH

SOIL CHARACTERISTICSDesirable properties of soil are :

They can be carried out in the field or in the laboratory.Plate Bearing Test 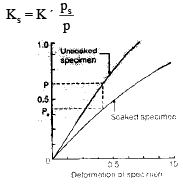  Correction for size of plate When the load is not adequate to cause 0.125 cm deflection of 75 cm plate, then smaller plate may be used. The corrected k value is

1. Strength : They should be strong to withstand stressed due to traffic wheel load.2. Hardness : They should be hard enough to resist wear and tear due to abrasive action. The mutual rubbing of stones is called attrition, which also may cause a little wear in the aggregates; however attrition will be negligible or absent in most of the pavement layers.3. Toughness : Resistance to impact due to moving wheel loads.4. Durability : The property of stones to withstand the adverse action of weather may be called soundness.Do you know?The aggregates are subjected to the physical and chemical action of rain and ground water, the impurities there in and that of atmosphere. Hence it is desirable that the road stones used in the construction should be sound enough to withstand the weathering action.

1. Shape of aggregates : Flaky and elongated particles have less strength than cubical and angular or rounded particles.

6. Adhesion with Bitumen : The aggregates used in bituminous pavements should have less affinity with water when compared with bituminous materials; otherwise the bituminious coating on the aggregate will be stripped off in presence of water.

2. Abrasion Test Carried out to test the hardness of stones.

The resistance to disintegration of aggregate is determined by using saturated solution of sodium sulphate and magnesium sulphate. Dry aggregate is immersed in above solution for 16 to 18 hrs. Then the specimen is dried in an oven at 105-110°C to constant weight thus making one cycle of immersion and drying.

W = weight of aggregate in a cylinderC = Weight of water in same cylinderGa = Sp. gravity of aggregate.

BITUMINOUS MATERIALSBituminous materials are mainly of two types 1. Bitumen and 2. Tar Bitumen may be petroleum asphalt (bitumen) or native asphalt.Do you know?Native asphalts which are associated with a large proportion of mineral matter are called rock asphalts. The viscosity of bitumen is reduced some times by a volatile diluent; this material is called cutback. When bitumen is supsended in a finely divided condition in an aqueous medium and stabilized with an emulsifier, the material is known as emulsion.

General Requirements of Bitumen1. Adequate viscosity at the time of mixing2. Low susceptibility to temperature.3. It should not strip off from aggregate.

Do you know?The penetration values of various types of bitumen used in pavement construction in this country range between 20 and 225, 30/40 and 80/100 grade bitumen are more commonly used. Tars are soft and penetration test is not used. 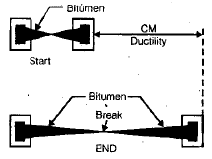 SC-cutback : These can be obtained by blending bitumen with high boiling point gas oil or by controlling the rate of flow and temperatures of crude during the first cylce of refining.Various tests carried out of cut-back bitumen are :(a) Viscosity tests at specified temperature using specified size of orifice.(b) Distillation test to find distillation fractions, up to specified temperature and to find the residue from distilation up to 360°C.(c) Penetration test, ductility test and test for water soluble in carbon disulphide on residue from distillation up to 360°C.(d) Flash point test on cutback using Pensky Martens closed type apparatus.

TARTar can be produced in 3 stages

2. Refining or distillation of crude tar.

3. Blending of distillation residue with distillate oil fraction to give desired road tar.The various tests that are carried out on road tars are listed below :

COMPARISON OF TAR AND BITUMEN