The output signal is in phase with the input signal and of same magnitude.Input impedance is very high, so it provides very good isolation between stages. 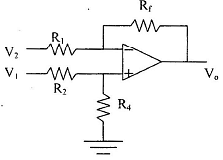 Precision Rectifier Main defect with Si rectifier is its cut in voltage of 0.7 V and so, voltages less than this value cannot be rectified. This defect is over come in op-amp rectifiers and voltages in the mill volt range can be obtained. 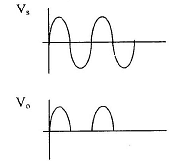 Check what type of filter is given circuit by just inspection putting w = 0 (capacitor open–circuit) and w = ¥ (capacitor short–circuit) In above circuit when w = 0 , C1 = open circuit and Vo = 0 V, similar for w = ¥ (C1 = C2) so it does not passes high as well as low frequency so it is band pass.Non - Inverting Integration 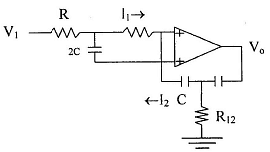 Comparator In a comparator, the level of the applied input voltage is compared with a known reference voltage:

1. As a comparator, the level of the applied input voltage is compared with a known reference voltage.2. As a comparator, the Op-amp are operated in the open  condition without feedback resistor.3. Since it is operated in open loop condition, the assumption (V+ =V– = Vd = o) is not applicable.4. Open loop  gain is very high, so output goes to saturation levels ( ± Vcc) even for very low inputs.5. If 1 or 2V drops in Rc’s of the transistor of the differential stage, the saturation voltage will be ( ± 13V) for a supply voltage of ( ± 15V) .

For positive Vo, Dz2 act as a diode and for negative V0, DzI acts as a simple diode. R restricts the current to the operating point of zener.

This circuit is known as by - phase amplifier:

Slew Rate It is defined as the maximum time rate of change of the output voltage (dvo/dt)max.Describes the large signal limitation of the opamp.For faithful reproduction of this sinusoid requires wVm £ slew rate where,Vm = peak amplitude of applied signal w = frequency of input signal.

Timing Circuit Digital systems require some kind of a timing waveform for example, a source of trigger pulses, for clocked sequential systems. Rectangular waveform is most desirable. The generators of rectangular waveforms are referred to as multivibrators.

1. Astable multivibrator is nothing but an oscillator, which generates rectangular waveform. It has two quasi-stable states, and doesnot require any triggering; hence it is referred to as a free running multivibrator.2. Monostable Multivibrator: has one stable state i.e. under steady state condition, its output is fixed it is either in the low or the high state. When the circuit is triggered with an externally applied pulse it goes into the other state, i.e. if it was in low state, it will go to high and vice-versa. The circuit remains in this state for the elements used in the circuit.3. Bistable Multivibrator: A multivibrator circuit in which both the states are stable is referred to as a bistable multivibrator or FF. This circuit makes transition pulse is applied.